Autism spectrum disorders (ASD) are a heterogeneous group of neurodevelopmental disorders that share two symptoms: social deficits and repetitive and stereotypic behaviours (APA 2013). There is a general agreement in the scientific community on its polyfactorial aetiology (genetic and environmental), hundreds of risk genes have been identified, but there is a lot left to understand about the different types of modifiers that can affect disease severity (Rylaarsdam and Gamboa 2019). Recently Golse and Eliez (2007) denounced the reduction of the descriptive dimension in scientific accounts of autism. With the expression “from Kanner’s to scanner’s autismµ they mean to highlight with concern that research on autism shows a shift from the descriptive-humanistic axis to the experimental-neuroscientific one. According to them, the second dimension should not replace, but integrate and complement the first one. In this article we try first of all to clarify what are the problems intrinsic to a purely neuroscientific approach to psychopathology; secondly, we show that, in recent years, the research on the early indices of autism is emerging as a profitable perspective that integrates the neuroscientific approach with a descriptive-humanistic one. In this framework, longitudinal studies and retrospective questionnaires administered to patients’ parents are among the most used tools for obtaining descriptions of children’s behavior. There has recently been a growing interest in examining pre-linguistic forms of communication in newborns in semiotic studies. In this paper, we will argue that anomalies in early forms of communication between newborns and caregivers are reflected in mature narratives of subjects with autism. 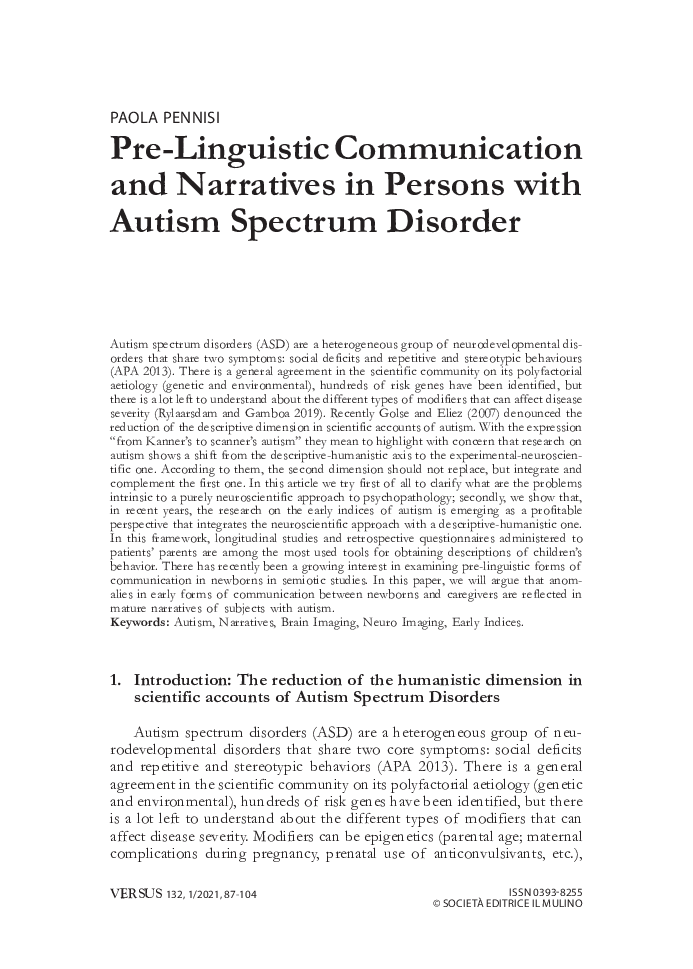