The recent arrival of new migrants fleeing from situations of war and crisis has produced a new state of emergency in Italy as well as in other European countries. In particular, the number of asylum seekers and unaccompanied minors has significantly increased in recent years. These changes in migration flows have put European immigrant policies under heavy strain and have strongly impacted on national reception systems. The present essay introduces the main themes of this special issue of «Autonomie locali e servizi sociali». More specifically, it looks at the vulnerabilities both of the Italian welfare system and of these new migrant people and it examines how national and local policies are reacting to these changes. As it is argued in the article, Italy has suffered more than other countries from these recent flows and is gradually restructuring and expanding its reception system for asylum seekers and refugees (Sprar). Nonetheless, the issue is still treated as an emergency. Many migrants live on the fringes of society, either because there are not enough places in the reception system, or because they are not in a regular position. There is a considerable gap between national policies and their local implementation, with many contextual differences and different perceptions of this phenomena. The social representation of asylum-seeker is also changing, by becoming more negative, which creates increasing problems of political consensus. Further challenges are brought about by the dramatic experiences many of these migrants have gone through and by the new requests made to social services, both by adults and minors, as is e.g. the case with unaccompanied minors, who were 14% of last year's arrivals. Given this scenario, the paper reports on how these new emergencies affect the Italian welfare system, the practices and perspectives for accepting and integrating migrants, and the competences and skills needed by street level bureaucracies for promoting an effective integration. 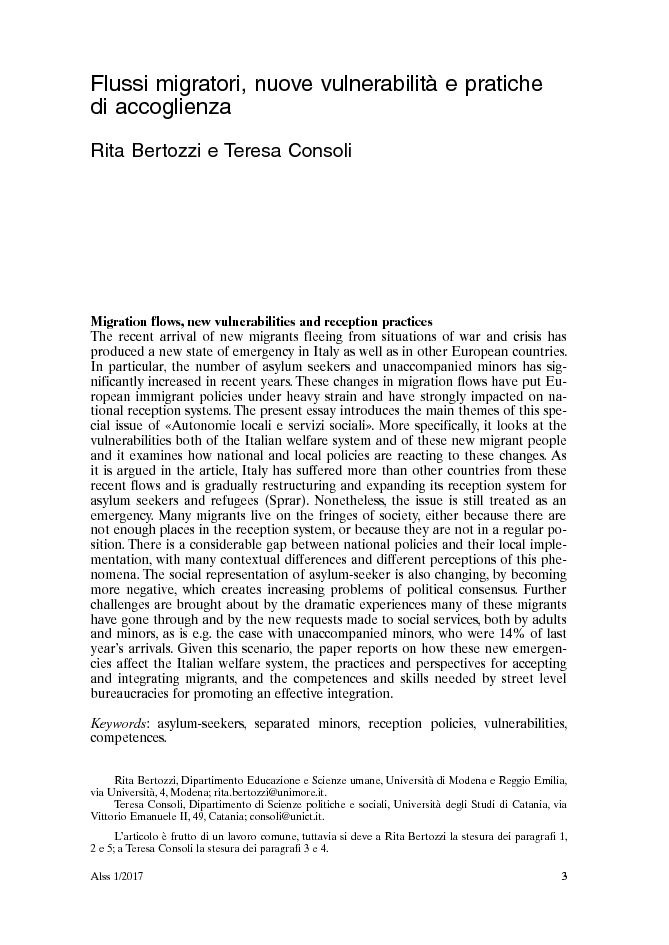