In the last years the important changes have brought to a fragmented, composite and uncertain context for social work. Globalization, neoliberalism, managerialism, on one side, and risk, vulnerability, social exclusion on the other, along with the severe economic crisis and the deep cuts in social spending seem to evocate an increasingly complex framework: social workers seem to find themselves in mid-stream or, even worse, in quicksand, uncertain whether to go on, come back or stand still (Allegri 2012). How do social workers perceive this condition? And how do they represent their own work to themselves? Realized by the University of Trieste, the Jacques Maritain Institute and Irsses, with the cooperation of Croas (the Regional Social Workers Register), the study which is described in this article focuses on a specific aspect of social workers' representations: the first meeting between a help-seeker and a social worker. The cognitive question of this study can be easily referred to social work features. First: the organizational position of social work, which can be described using words as boundary (Fargion 2009), junction (Facchini 2010), crossroads (Ferrario 1996; Allegri 2006; Gui 2009). Second: the relationship, which is recognized as a fundamental tool of social work by both academics and professionals (Gui 2004; Dal Pra 2010; Facchini 2010). Third: the importance of acceptance, which is an «unique circumstance» (Simone 2013), characterized by dynamic, processual, relational features, worthy of a methodological and political attention. Focusing on the representations of the relationship between a social worker and a help seeker, this study highlights the shared professional knowledge, which can be considered as an expression of practical knowledge (Allegri 2006). 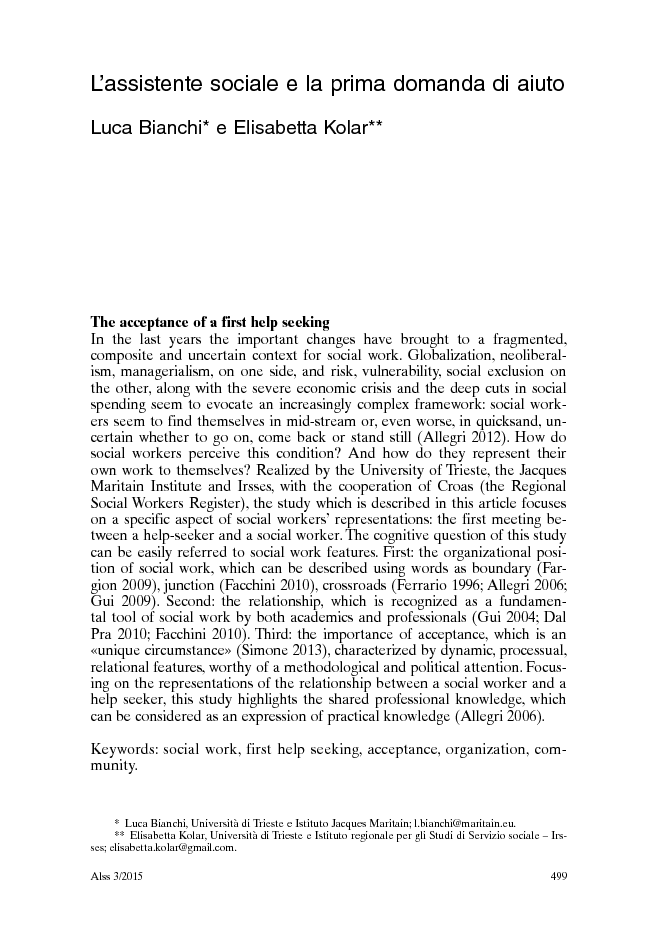