Great attention has been paid in the last two decades by the institu¬tions of the European Union (EU) on the importance of communicating their functions and activities to the citizens. In this context, symbols and events have been playing for the Union an important role for iden¬tity formation at a transnational level, given the lack of a genuinely transnational press and the nonentity of communicative and linguistic common denominators, such as a transnational public discourse. The "Treaty establishing a Constitution for Europe" (TCE) and its signature in Rome, in 2004, within the communicative framework set by the Union's communication strategies of the early 2000s, are a milestone of European integration, a brick for the formation of a European identity and a case study to investigate the whole EU integration process, which can be still considered to be evolving during these last years, making some progressive steps forward but, increasingly, stepping back. This paper contemplates, from a theoretical perspective and an historical contextualisation, the role played by the Treaty and its signature within the institutional efforts to foster a European identity. The Treaty itself could have had a stronger impact for European citizens both from an institutional and from a symbolical point of view, as many scholars were expecting analysing the - though somehow weak - text? Following the Constitution' rejection by France and the Netherlands in 2005, in 2007 the Heads of State and Government of the then 27 Member States signed, in fact, the 'Treaty of Lisbon', where the resizing of the symbolic aspects and the abandonment of the word 'Constitution' were necessary steps to overcome the impasse of the referendums' refusal. In a world of nationalistic reminiscences and populist campaigns, after Brexit, the failed ratification of the TCE is an important case study, where lack of national political vision, misunderstanding of popular support and the nation-oriented position of the media all played their role. 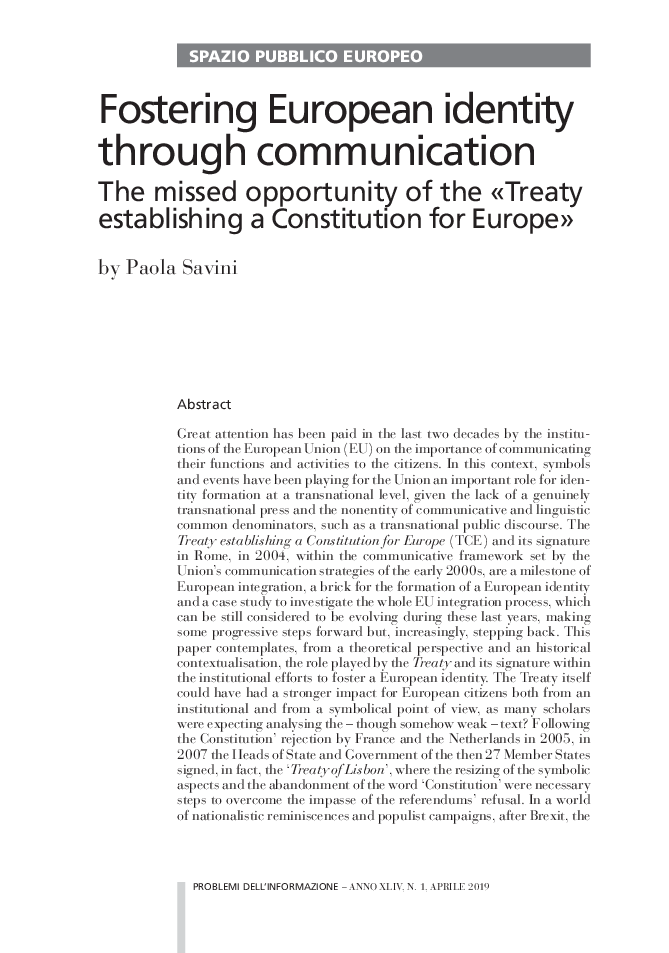