The journal poses three questions about the main issues of active labour policies to four professors of labour law (three) and of economics (one) who have, or had in the past, experiences of regional administration. The answers offer an articulated picture, related to the local realities and to the different general approaches of each professor/administrator. In one case, a particular emphasis is put on good performances of the Region, claiming more autonomy, mainly referred to the neo-centralistic change proposed in the Constitutional Bill in discussion (Bianchi Emilia-Romagna). In other case, a severe criticism of the most recent legislative reforms is formulated, as regards both the general frame and the practical fall-out. Therefore, a strongly negative evaluation of flexicurity is formulated, underlining its ideological nature and, in any case, the impossibility to implement the flexicurity project in the actual conditions of labour market, mainly in southern regions (Barbieri, Puglia). Those who are more in agreement with the recent choices of the legislator insist mainly on a change of mentality as regards an efficient use of the instruments of active policy instead of the s.c. passive and "charitable" ones (e.g. the open end Cassa integrazione ) (Caruso, Sicilia; Valente, Lazio). They do not leave out the dramatic difficulties of this change, particularly in southern areas of the country where patronage, politics and illegal conducts are strongly deep-rooted, in the context of occupational unbalance (Caruso, Sicilia). All the answers, beyond the differences of opinions, stress anyhow the difficulties of organization depending on the weakness, typically Italian, of public institution devoted to the government of labour market, on the scarcity of economic resources and on the incertitude of continuous, and still in progress, revision of the Constitutional norms. 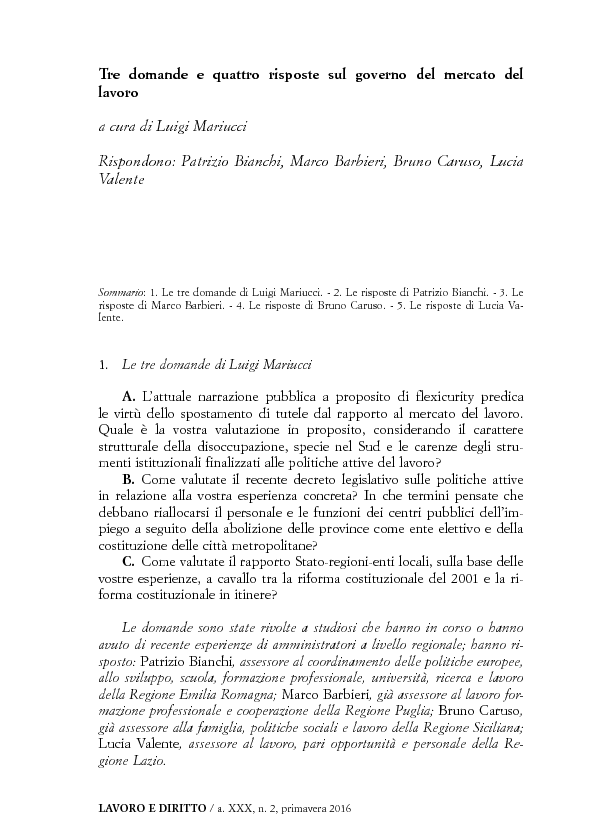