The essay addresses the theoretical issue of labour exploitation in labour law starting from the pyramid drawn up by the European Union Agency for Fundamental Rights (FRA) to graphically represent the phenomenon of labour exploitation. At the bottom of the pyramid are represented the least severe forms of exploitation, while the top of the pyramid represents the slavery. After recalling the facts that have most recently showed the issue of labour law exploitation in Italy (the attacks on migrant workers in agriculture in the Plain of Gioia Tauro, in Rosarno), the essay focuses on its multiple regulatory dimensions (International law, EU law and domestic law, with particular regard to Criminal law). The issue of labour law exploitation not only has multiple regulatory dimensions, but also theoretical ones. The economic exploitation of labour is a large part of the theory of surplus value, while considerations related to materialist feminism underline how empowerment is a central topic. The theoretical approach to fundamental human rights, moreover, leads to a limiting response to the private powers of employers in dialectical relation with the Marxist theory of exploitation. The labour exploitation in its multiple dimensions can be expressed with the term intersectional exploitation. The conclusions link exploitation to the different perspectives of labour flexibility of migrants and EU citizens by answering one of Luigi Mariucci’s questions to which the essay is dedicated: after flexibility, what? 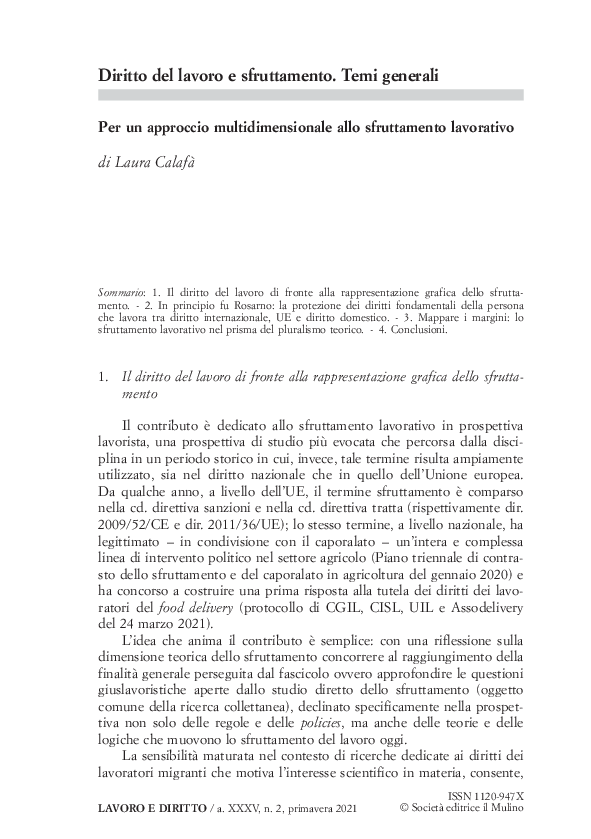