«Neither God, nor law»: with this formula, in 1934 Marcel Granet described to the Western public the essence of Chinese customs. According to him, in China «Religion is not a differentiate function of the social activity». Therefore, he called on refraining from inserting a chapter on religion in any work dedicated to Chinese thought in order to avoid the risk of “cagingµ the Chinese civilization in patterns typical of other cultures (Granet 1934). However nowadays, more than forty years after the beginning of the legal reforms inaugurated by Deng Xiaoping in 1978, no one could seriously claim that China is «a country without law». The same goes for religion: as many scholars pointed out, only by freeing ourselves from any kind of «Orientalism we can grasp the deepest sense of Chinese religiosity, understanding that it is mainly a cultural expression, rooted in the social and family fabric to the point of being almost indistinguishable from it» (Said 1978; Ruskola 2002). How has the relationship between religion and law been shaped in Mainland China’s legal history? To what extent have the ethical principles underlying Chinese civilization had an impact on the Chinese traditional legal system? Have the ancient Chinese ever taken into consideration the existence of «other» forms of justice, aside from the earthly one? And, if so, what do they look like? These are some of the questions to which the present work aims to answer. With all due respect to Granet, we will start from the analysis of the Chinese characters that translate the concepts of religion, crime and punishment, to understand what are the (religious?) principles at the basis of traditional Chinese law, and if and to what extent they still can be found in the current legal system of the People’s Republic of China. 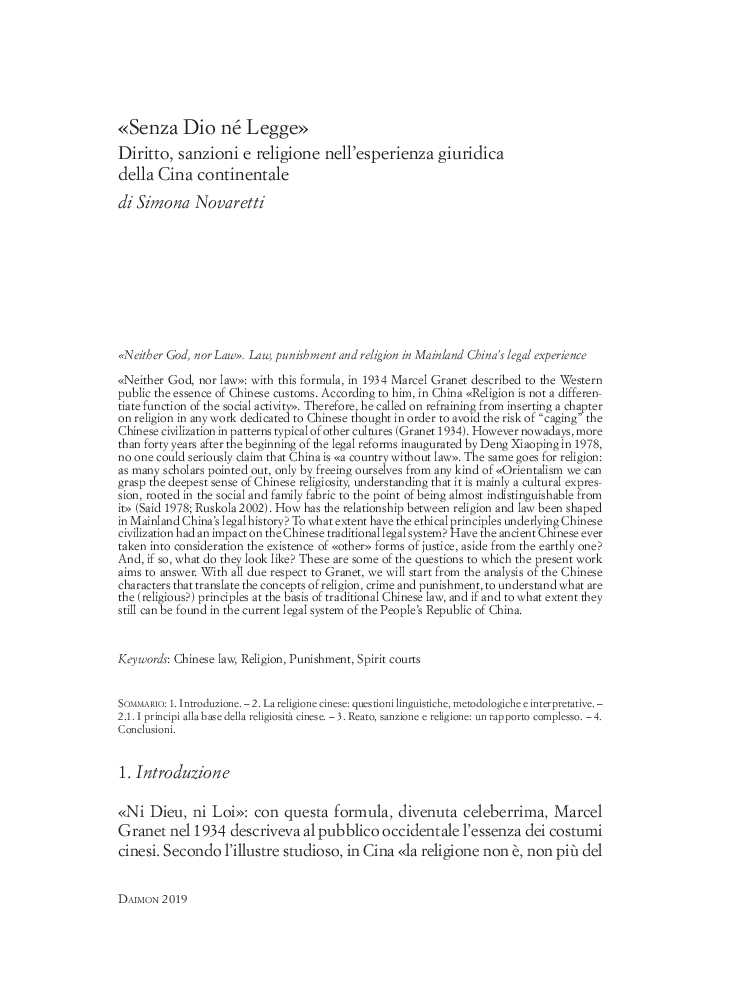