The first two articles of the d. lg. 14 June 2019 n. 53, converted with modifications with l. 8 August 2019 n. 77, c.d. «decreto sicurezza-bis», establish new provisions regarding the entry, transit or stop of ships in the territorial sea. These provisions, which became part of d. lg. 25th July 1998 n. 286 (Immigration Consolidated Law), introduce new enforcement powers by the Minister of the Interior directly affecting the masters of the ships and the shipowners. Therefore, questions arise concerning aspects of Navigation Law that this essay tries to highlight. Firstly, the exercise of the new functions on vessel traffic attributed to the Minister of the Interior by the new paragraph 1 ter of the art. 11 t.u.i. raises the issue of the compatibility with the art. 83 c. nav. and with the responsibilities of waterway police that the navigation code reserves to the Ministry of infrastructure and transport and to the Maritime Authority. Moreover, it emerges a troublesome relationship between the prohibitions on the masters of the ships as a consequence of the application of the new paragraph 1 ter of the art. 11 t.u.i. and the rules of international law of the sea. These, in fact, on the one hand, impose the masters of the ships to rescue people in distress at sea and to lead them to a safe place (and the States to make sure that this duty is effectively observed); on the other hand, these rules expressly establish as innocent the passage in the territorial water of the ship that intends to stop and anchor in the territorial sea in the event that this is functional to rescue operations (art. 18, par 2 of the UNCLOS). 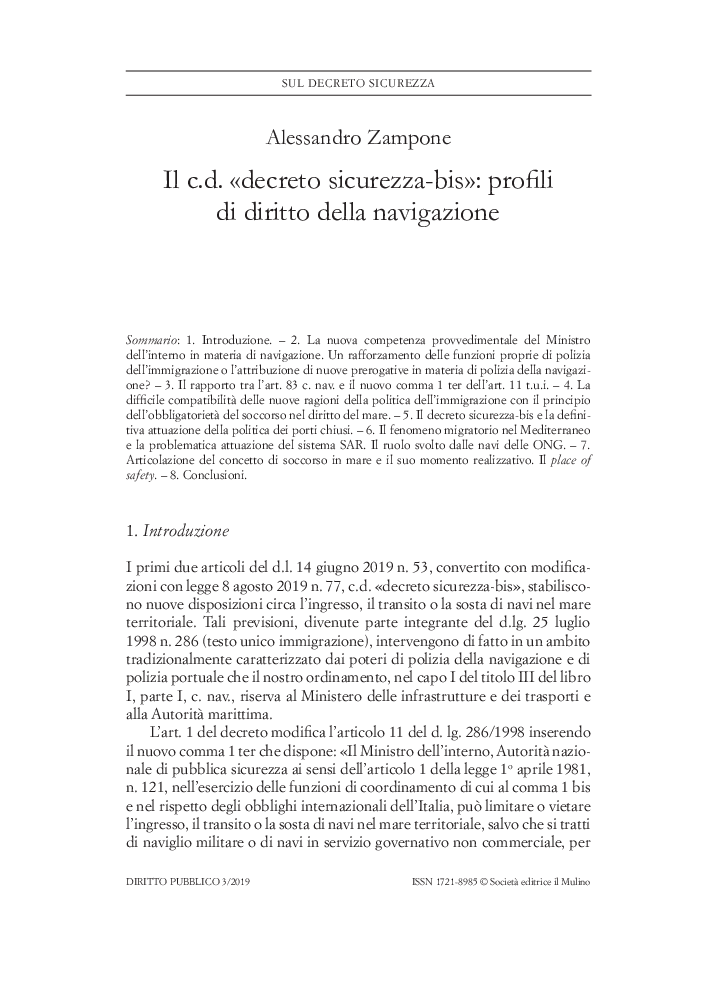