The essay starts out with a verification, and demonstration, that the reform of Title V of the Constitution has considerably increased the financial autonomy of the Regions and local government institutions, and that this is liable to compromise the values of equality in connection with the idea of national citizenship. There is a widespread awareness of the danger of such an outcome in federal systems, so much so that in order to avoid the same two types of antidotes have generally been adopted, one being the determination on the part of the federal State of common standards of rights to be guaranteed to all individuals, and the other being the function of the federal State to redistribute resources for the benefit of certain federated states. The essay attempts to verify whether or not it is possible to construct analogous antidotes under the terms of the new Title V and, if so, how. The first factor to emerge is the exclusive competence of the State to define the "essential levels of services concerning civil and social rights that must be guaranteed throughout the national territory." The centrality of the equality of rights, as opposed to services performed, implies that this antidotes hardly represents the definitive solution because in any case the use of quantitatively different resources on the part of the single institutions is necessary; in a system characterised by social and economic disequilibria the matter of assuring essential levels inevitably presupposes measures for the redistribution of resources on the part of the State. On the other hand, these same imbalances together with the pronounced financial autonomy of Regions and local government institutions engender disproportionate effects, including in the matter of the resources available to each individual institution. From this derives the need for a type of redistribution that takes into due account both the differing spending needs of each institution (equalisation of needs) and the different level of resources provided to each by its autonomous sources of income (fiscal equalisation). In both cases this redistribution makes it possible to compensate for the effects of existing imbalances (greater need and lesser fiscal capacity), but in order to avoid having a like situation drag on indefinitely measures aimed at removing the underlying factors of disequilibrium become necessary. Fiscal equalisation is brought about by the special fund for the purpose provided under Art. 119; moreover, based on a systematic interpretation of the norm, it can be stated that said equalisation must be integral. The redistribution of resources as a function of the removal of factors of imbalance is obtained by means of the extraordinary measures provided under Art. 119, Par. 5, and the overall system is to be reconstructed in such a way that the granting of such resources is accompanied by making the institutions receiving them accountable and by the subsequent reduction of equalisation measures for their benefit. The equalisation of needs involves matters going far beyond the problem of the funding of essential levels, and not only because is there a need for sufficient resources to assure such levels, and in any case to adequately perform the assigned functions. In addition, it is necessary to guarantee an equal degree of autonomy to all institutions. Based on Art. 119 of the Constitution, the system for setting up the new financial arrangement for autonomy can be reconstructed in such a way as to achieve a like result. The redistribution of resources then poses two additional sets of problems. The first pertains to the relationship of the various levels of sub-national government, which the Constitution resolves in the sense of recognising to the Regions a liaison role between the State and the local government institutions. The second regards the need for the entire system, established in terms of certain realities, to be able to adjust to change. In terms of the Constitution it is possible only in part to reconstruct suitable rules for automatically assuring this adjustment. For that matter, it is necessary to conceive of procedural mechanisms for achieving consensus among the various levels of government, which is where the new Title V appears to be most wanting. 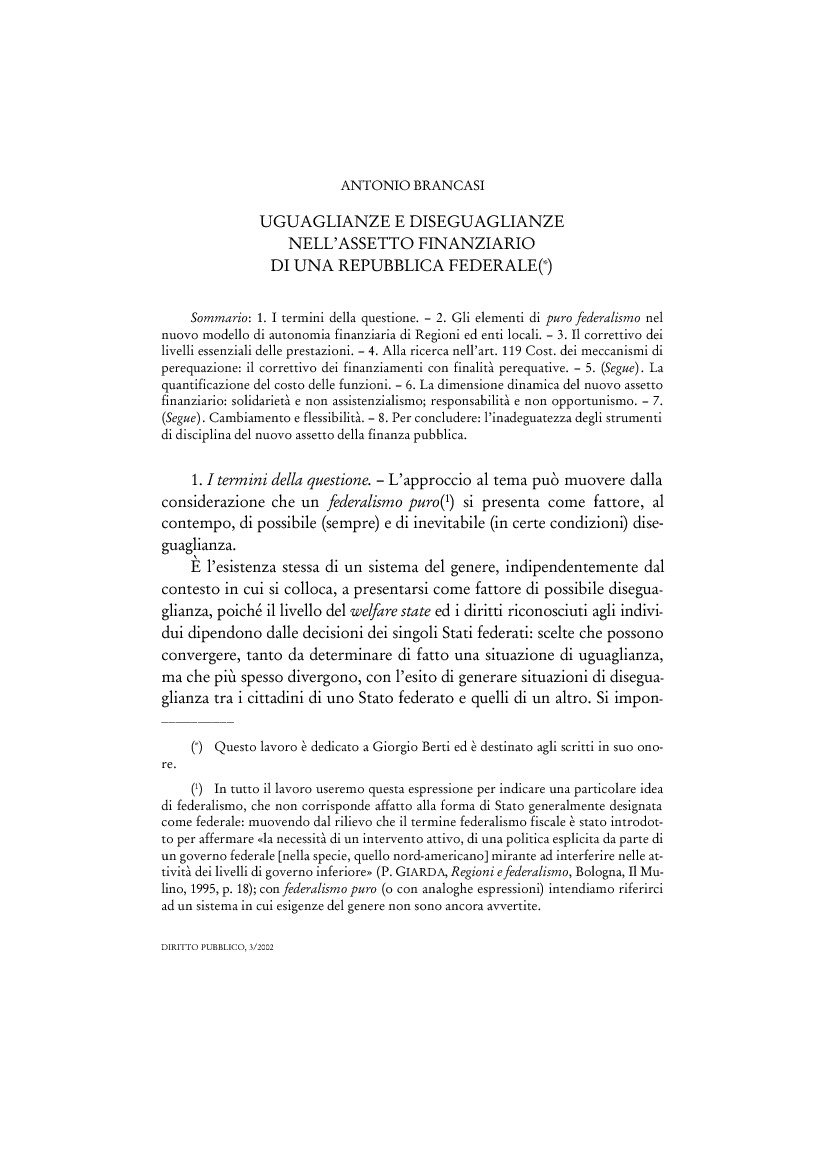