The author examines the co-ordination of public finance in fiscal federalism beginning from the twofold accepted meaning of co-ordination of public finance and tax system, pointing out how in this matter we have witnessed a promiscuous utilization of the two types of co-ordination, expression of the pretention to solve problems relating to the current economic situation by means of general normative provisions. But the author observes that an opposite phenomenon also exists, i.e. that of treating as transitory measures that instead are significant in the larger sense of general rules (in other words, disguising as dynamic co-ordination what instead has the characteristics of static co-ordination). Such is the case of the twofold purpose with which the delegated law on fiscal federalism (Art. 18 of Law No. 42 of 5 May 2009) utilizes the standard costs and needs of regions and local authorities concerning essential levels of services and basic functions. In this context the author points out how the presuppositions are lacking for a correct use of the dynamic co-ordination of public finance and the tax system. In fact, a carefully defined autonomy is required in order to be able to talk of co-ordination rather than of ordering, whereas it must be observed that the measures for implementing fiscal federalism - with regard to municipalities, regions and provinces/metropolitan cities - leave incomplete whole pieces of the overall design and even go so far as to defer the construction thereof to non-legislative measures. Moreover, if it is true that the Constitutional Court has ruled that financial co-ordination also can be exercised with administrative powers, this possibility was justified in the presence of the (presumed) merely technical nature of such powers, while the reference made to Decree of the Prime Minister by the legislative decrees implementing so-called fiscal federalism have as object the very definition of important conforming elements of the financial autonomy of regions and local authorities. In all these cases not only is there a saving clause problem but also - what is of greater interest for present purposes - the very presuppositions get compromised so that there can be a correct dynamic co-ordination: in fact, these regulations actually serve to establish the financial autonomy of regions and local authorities, even defining the areas of respective pertinence of the various levels of government, and therefore are bound to have content of a codified type. The circumstance that contents of the kind have a non-legislative form have the inevitable effect of making even more precarious the autonomous status that ought to pre-exist the dynamic co-ordination of public finance and the tax system. 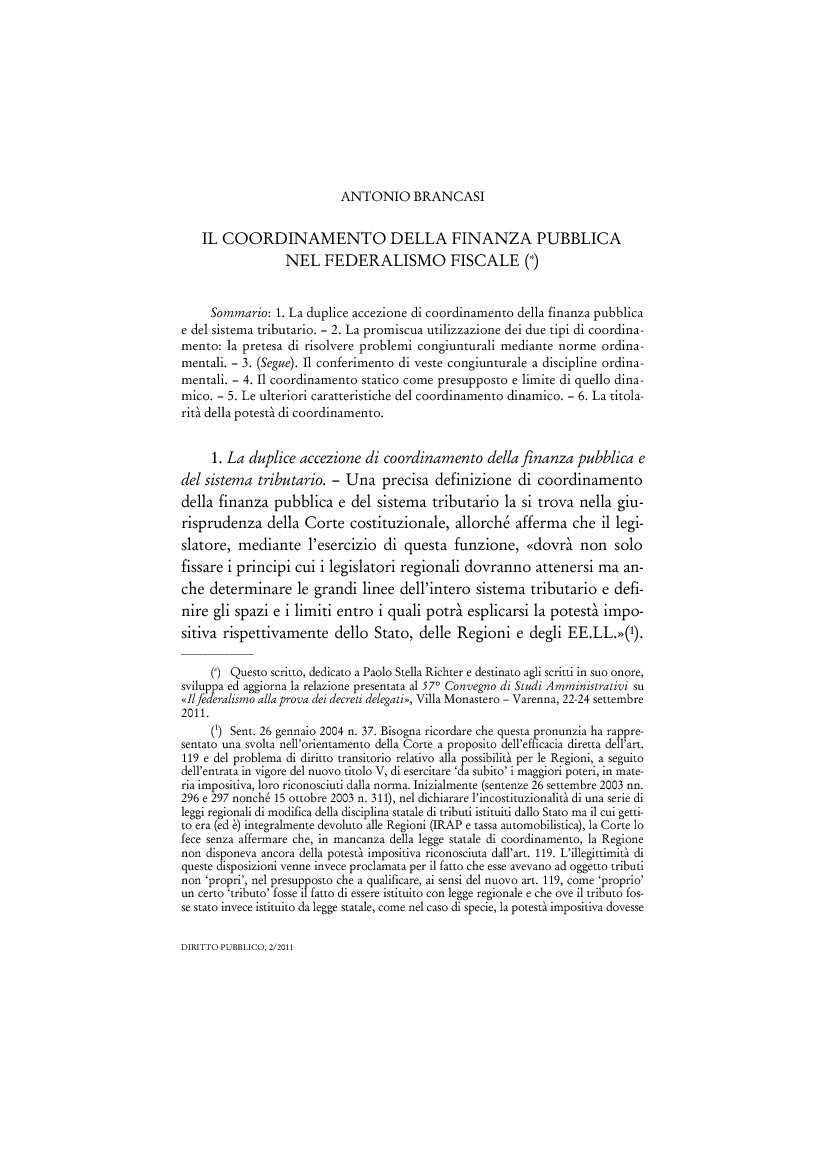