Is it possible to queer legal analysis? The queer point of view allows a critical analysis of identity politics by shedding light on the way in which personal identities - especially sexual identities - shape the legal status of people and affect social, economic, and familial relationships. Queer studies point out that there is only a slight distance between a legal regime that recognizes and protects a certain identity and the imposition of a discipline based on that identity; they reject the idea of a sexuality trapped in gender or other normative sexual identities, so much as every attempt to pigeonhole people lives. Nevertheless, the queer critique of identity politics does not imply a return to the universal, abstract, neutral subject; on the contrary it puts in the foreground the materiality of lives, of sexual and power relations, at the same time disclosing a new legal technicism, related to the recognition of (individual and group) identities, antidiscrimination law and the human rights discourse, which obscures the real political implications of legal enforcement. In law, the critique of identity politics, heteronormativity and the normalization of subjectivity makes it possible to queer some aspects of family law and other legal apparatuses that contribute to the legal construction of heterosexuality. As a critical approach to legal thought, queer legal analysis benefits from the encounter with other modes of critical thinking, namely from postcolonial studies, which allow to distance from the colonizing Euro-American-centric approach, and to embrace a notion of sexuality which may be contingent and transversal, local and transnational at the same time. 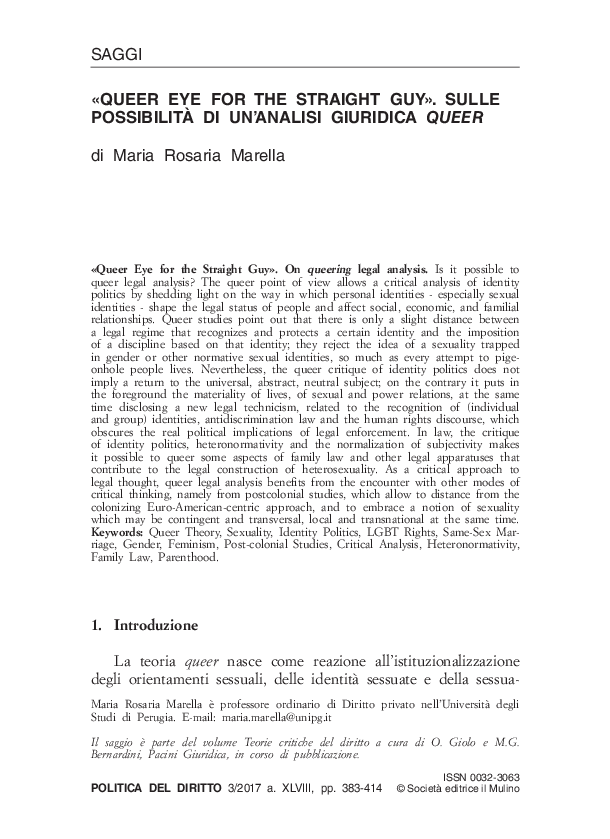