Bail-in tool, creditors’ rights and European Convention on Human Rights (J. e . l .: K; K22). The B rrd and its «deadly» tool of the bail-in (or internal banking recapitalisation) have been in place for longer than five years. Applications (and misapplications) of the resolution tools within the multifarious scenarios of insolvency of credit institutions have occurred regularly. Nevertheless, the coherence of the bail-in with the European Convention of Human Rights does not appear to have been ascertained, but within erratic and tangential dicta of the Strasbourg Judges. Yet, these court decisions have dealt with the matter indirectly rather than directly: the relevant controversies were focused on the protection of the traditional rights of ownership, while the safeguard of the credits subject to internal banking recapitalization has been on the background. Bearing this in mind, the contribution, first and foremost, carries out an analysis of the area of law of the E u B rrd , juxtaposed against the right of possession/ownership of the Convention, pursuant to the parameters of the legality and proportionality. Additionally, it discusses its pillars (among the different ones, those expressly stated like the «no creditor worse off principle», the other ones apparently missing such as the «no shareholder worse off principle»). Via a methodology which is both theoretical and empirical, the entire matter is discussed and compared with the general principles of law pertaining to the creditors’ protection, including the general liability enshrined in the Italian civil code, as well as some fundamental principles of insolvency law, the latter being «dissected» also from the standpoint of the English common law and the British legislation. The outcome of this is that the matter at stake is far from being settled, in fact it is at times inconsistent with the rule of law. Ultimately, the contribution corroborates the view that the European Convention, in a prospective scenario of «U k Convexit» too, could be one of the new battlegrounds where both scholars and courts may «unleash hell» on multiple issues, currently neglected, within the broader area of the banking crisis. Finally, the paper hints at the possible amendments to the B rrd , based on a «contractual approach»; the latter, if implemented in a B rrd II, could theo- retically prevent the entire E u B rrd from being challenged in the future. Unfortunately, the 2019/879 Directive, meanwhile passed, does not seem to be «fit for purpose». 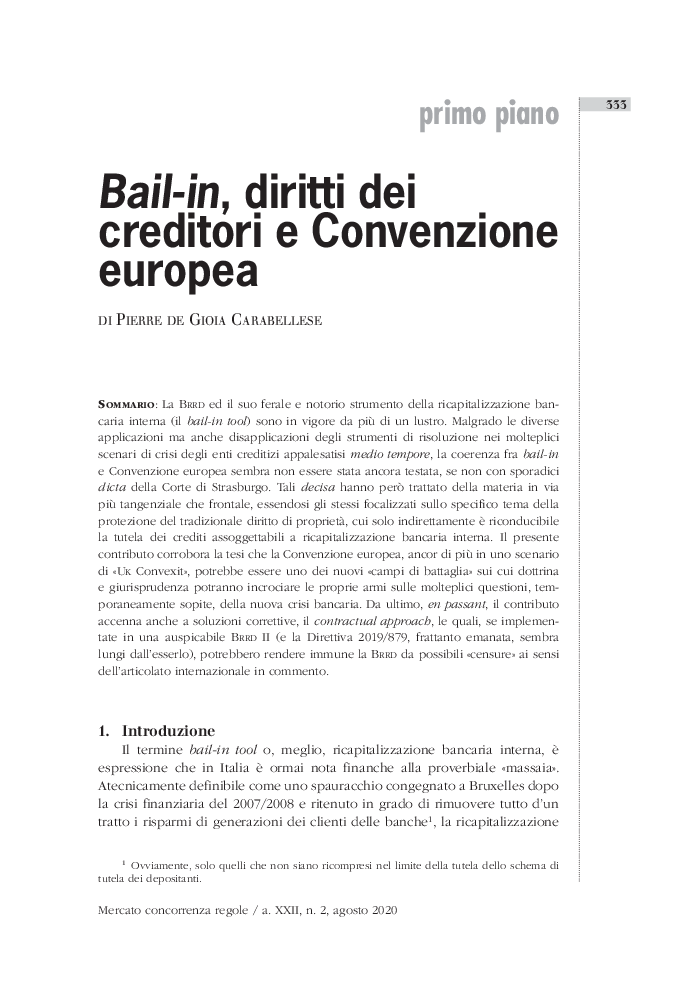