The financial crisis which, starting in 2008, quickly spread from the United States of America to Europe, imposed a decisive rethinking of investor protection instruments. In the context of European regulation, banking and financial laws have played along two distinct lines: one aimed at strengthening prudential supervision (Directive 2014/59/Eu (Banking Recovery and Resolution Directive, for brevity «Brrd» and Reg. No. 575/2013/ Eu, Capital Requirements Regulation «Crr»); the other relating to the relationship between client-investor and intermediary-financial and to the strengthening of the information controls held by the latter. Despite the efforts and the adoption of industry disciplines (Mifid, Brrd, Crdiv, Prospectus Directive, Transparency Directive), at this time it seems that have not been identified instruments of concrete and effective protection of the saver, as shown by the plural interventions of special legislation adopted by the Government following the crisis that hit the «four banks» (Cassa di Risparmio di Ferrara, Cassa di Risparmio di Chieti, Banca delle Marche, Banca Popolare dell'Etruria and Lazio) and the Veneto banks (Banca popolare di Vicenza and Veneto Banca) subject to extraordinary safeguards for compensation for damages entrusted to «public loans». The general regulatory framework seems to have not responded to the expectations and confirms the feeling that it is necessary a structural intervention, not only based on emergency, by the legislator to ensure concrete judicial protection to investors. 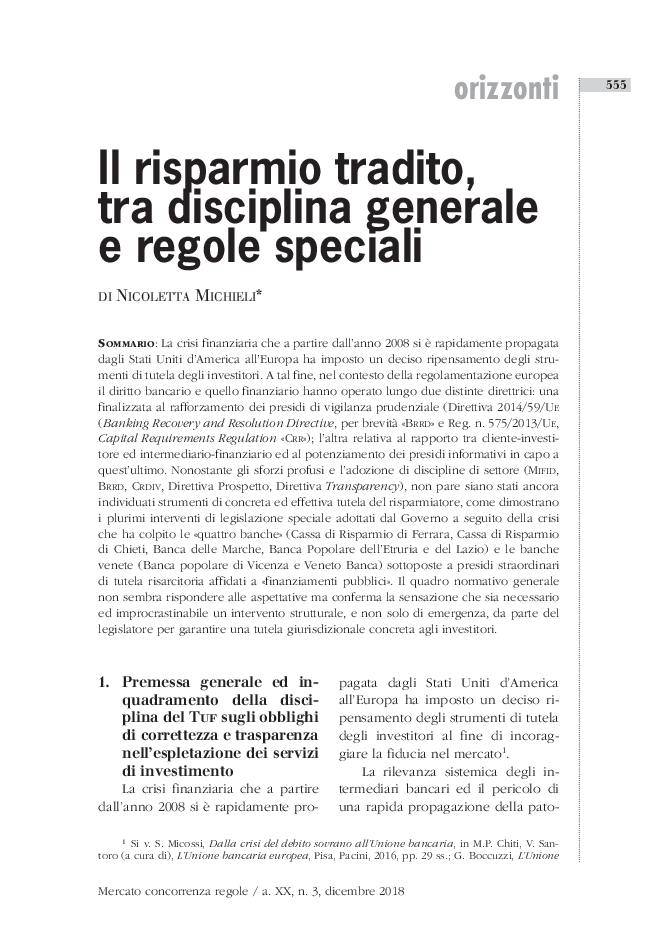