With a recent decision, the European Commission has cleared, subject to a number of commitments given by the parties, the proposed acquisition by Generali, the Italian company leader in the insurance sector, of INA, one its largest competitors, by means of a public offer. According to the commitments attached to the decision Generali will divest its controlling stakes in three subsidiaries active in the life insurance sector, and its minority shareholding in the competitor Fondiaria, while INA will divest its controlling stakes both in the bank Banco di Napoli and in the insurance company BNL Vita. Moreover, Generali will eliminate or reduce the interlocking directorships concerning the Board of directors and Executive Committee of INA and those concerning its own Board and Executive Committee. The commitments concerning the reduction of interlocking directorates will prevent such personal relationships from affecting the competitive behaviour of the market players. Furthermore, as regards Fondiaria, the commitment that Generali will dispose of its stake in that company will remove a link which again could have led to the co-ordination of the commercial behaviour of the two companies. The European decision and the committments attached to are examined in the light of the particular ownership structure of the Italian insurance and financial system, characterized by a thick web of reciprocal and circular holdings and the extensive recourse to interlocking directorates between competing companies. It is suggested that this structure may lead to undesirable distortions of competition, exacerbated by some specific characteristics of the financial markets and prudential regulation. Morever, the enforcement of prudential regulation by the Italian surveillance authorities, even if partly justified from a stability point of view, seems to strengthen the present ownership structure, by disfavoring hostile takeovers, and by rendering more difficult the entry into the markets of foreign companies through mergers. In that situation, the imposition of remedies in the appraisal process of mergers by antitrust authorities is an important tool but it may not suffice to restore conditions of effective competition in the markets. The paper suggests that in order to overcome the restrictions of competition led by the "circular" ownership structure prevailing in the Italian financial system, alternative tools should be used, such as the rules against anticompetitive agreements, and considers the possibility to introduce a regulation dealing specifically with interlocking directorates. 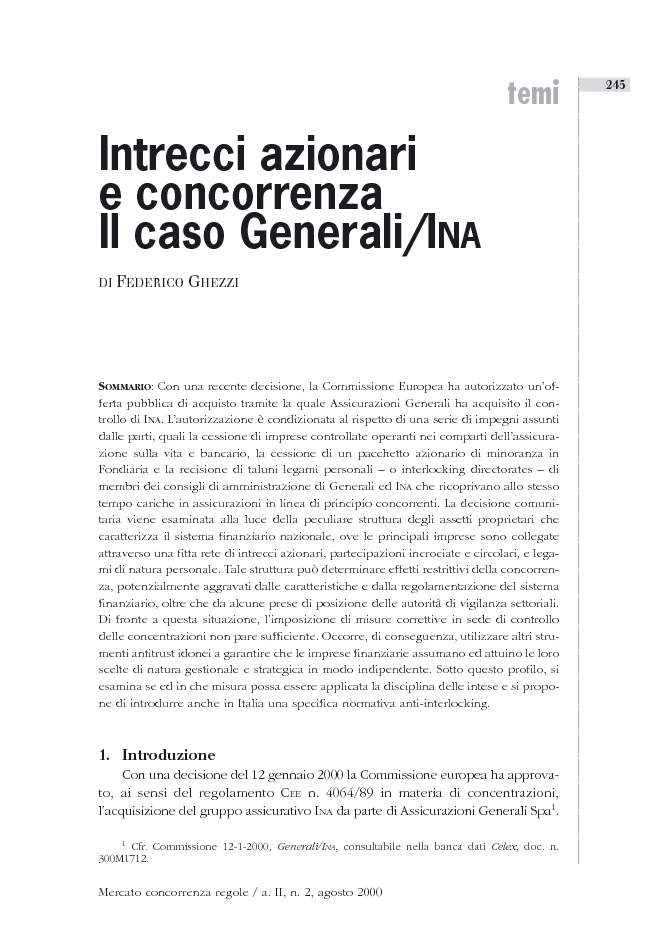