This article aims to investigate whether and how the application of European state aid rules to the public funding of public broadcasting organizations in Europe, may have an impact on the renewal of the Italian Broadcasting State owned company («RAI») concession (the «Concession»). The Concession will be granted to RAI, without any tender procedure, by the end of October 2016 and will have duration of 20 years. RAI achieves public aids (canone) but also income from its commercial activities (mainly advertising). In a first section, the article summarizes the Eu regulation and the European Courts decisions concerning the application of the State aid rules and compensation for services of general economic interest, focusing its analysis on the broadcasting industry. In a subsequent section, the article summarizes the Italian regulations concerning the activities of RAI, with particular attention to the use of the public resources achieved and managed by RAI. In the final section, the Author reaches the conclusion that the complex regulations in force in Italy (which also concern the criteria adopted for the use of RAI's public resources) do not allow to accurately verify how the public resources are used; in particular, it is de facto impossible to ascertain whether the public resources are used for public services only or also for RAI's commercial activities. These facts give rise to concerns of possible cross subsidies and overcompensations of RAI's public services, which could negatively affect competition in the Italian broadcasting industry. In the Article, certain remedies (which should be adopted before the renewal of the Concession) aimed at making the RAI public funding compliant with the Eu state aid rules, are proposed. The proposed remedies are in line with several opinions given by the National Telecom and media Authority - Agcom as well as by the Italian antitrust Authority (AGCM), which are reported in the Article. In the Article it is also suggested that the Italian State, before granting the Concession, should start a consultation with the Eu Commission - DG Comp (in coordination with the AGCOM) in order to better regulate the use of public resources granted to RAI for the next 20 years. 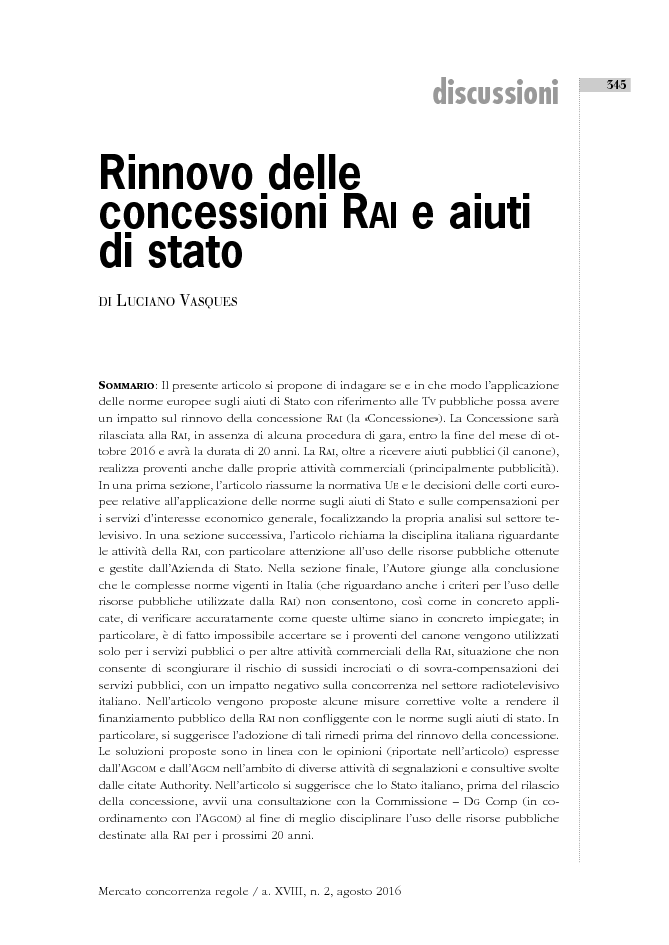