The notion of private enforcement assumes some kind of deviation from the general discipline, in order to incentivize judicial initiatives of private parties. European law does not contemplate any consistent proxy of a specific regime shaped after the goal of promoting private initiatives against breach of competition law. This being the framework, it is to be recognized that, from a legal point of view, the European debate about private enforcement of antitrust law boils down to the produce of an optical distortion, consisting of looking at a (peculiar) case of tort liability through the lens of another discipline. As usually occurs whenever an infringement of a public law, in and of itself susceptible of triggering some sort of administrative or criminal sanction, determines also some loss for an individual, the two trajectories remain conceptually autonomous: a feature that is preserved even where the pre-existence of an administrative ruling influences heavily the practical viability of a private action. Yet, it is obvious that remedies in the context of private litigation also serve the public interest in maintaining effective competition in the market. This circumstance does not mean that tort law, when referred to prejudice provoked by an anticompetitive behaviour, becomes a province of antitrust enforcement. The alternative, then, is not whether there ought to be private redress in addition to public enforcement; the basic question is whether private antitrust damages actions should be encouraged via a more favourable legal framework than the current one. Though somehow controversial, the prevailing analytical approach shows that public enforcement is beneficial, but insufficient, which implies that it needs to be complemented. The aspiration to make the EU right to compensation of antitrust damages more effective could suggest a sectoral strategy, aiming to reshape national rules in so far as they hamper the achievement of the objective of assuring that injured parties be provided the opportunity to effectively exercise that right. This option could be pursued invoking the opportunity to eliminate disparities in the legal regimes and create a level playing field between national jurisdictions as regards both the possibility for private claimants to seek compensation in national proceedings, and the reduction of legal uncertainty. How to get there is problematic. The shortcut of an authoritative intervention, imposing a common frame limited to the antitrust area, lies probably beyond realistic expectations. Accordingly, whether antitrust enforcement will be significantly fueled, in the future, by a more consistent contribution of private suits will depend largely on cultural developments that do not pertain to the antitrust realm. 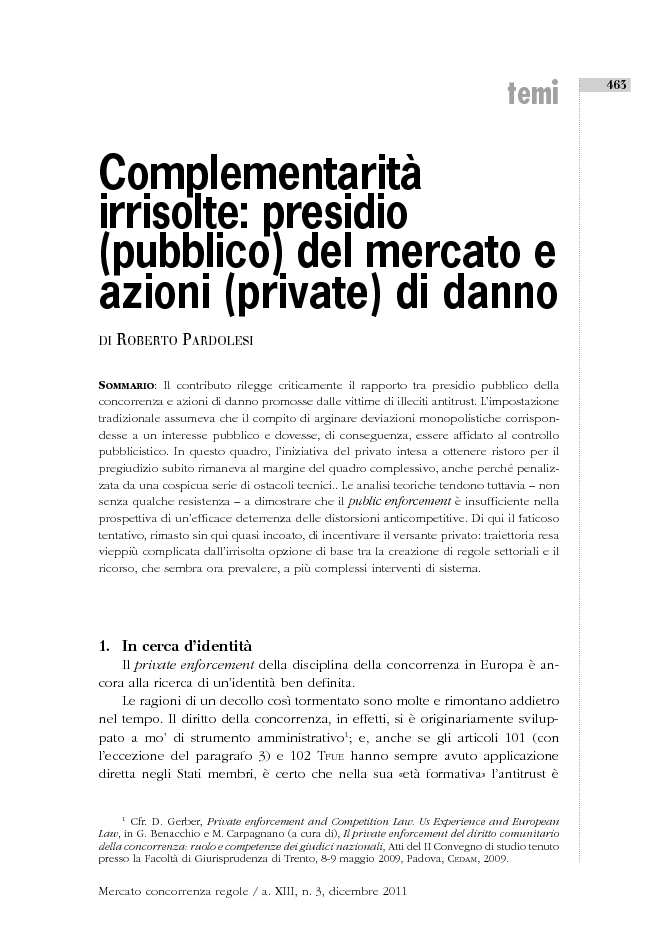