The «economic approach» to competition law has gradually made its way through European antitrust beginning with the assessment of undertakings in restraints of trade through the introduction of a more benign approach towards vertical agreements. The path continued with the new merger Regulation which codified pro-consumers efficiencies as countervailing factor to justify market power concentration in the hands of few firms - provided, however, that the merger will not significantly impede effective competition in the common market or in a substantial part of it (art. 2 [3], Reg. n. 139/2004). Eventually, under the wake of the overall modernization trend, the «economic approach» has found room in the recent Guidelines on non-horizontal mergers (2008) where the Commission has introduced a more favorable treatment towards the latter. Finally, the supporters of the so called «more economic approach» turned to the abuse of dominant position doctrine, attacking the traditional methodology of analysis, viewed as too rigid and formalistic, and proposing a new interpretation of art. 102 aimed at absolving exclusionary conduct capable of producing enough pro-consumer efficiencies to outweigh any likely anticompetitive harms. Such new approach, however, has attracted widespread skepticism because, inter alia, several commentators feared it was ultimately aimed at deleting a distinguishing feature of European antitrust: namely, the principle of dominant firms' special responsibility. The European Commission has endorsed these concerns in its new Communication on enforcement priorities in applying Article 102, where only apparently it opens to the «new» «more economic approach», while in substance it sticks to the milestone principles of the classical doctrine: in particular, that the paramount goal of European antitrust is the preservation of an effective competition on the market rather than consumer welfare in itself, i.e. disconnected from the former. 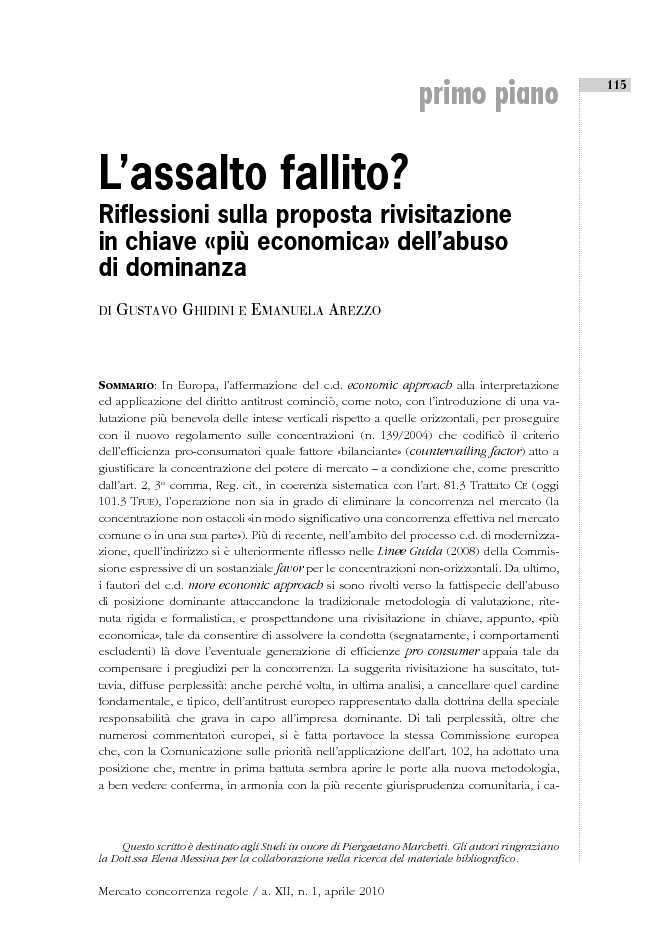