The rise of welfare culture, which culminates in most European States in the mid-twentieth century, has its roots in the 18th century, already with the French Enlightenment. At first, the Church and the clergy played a major role in welfare, then - thanks to a secularization process - this role was taken on by the State, at least until the triumph of neo-liberal ideas. In particular, this paper proposes a descriptive analysis of the conditions of «projetti» and «projette», abandoned children, entrusted with public and private assistance in the Kingdom of the Two Sicilies, and of the nurses («balie»), an intermediate figure in the welfare process, which were in very bad economic situation: exploited by municipal administrations, they were often offended and not considered real workers despite their important action. The analysis, also based on the documents of the Naples State Archive, highlights how, during the period from the early 19th century to the Unity of Italy, the difficulties of State finances in the Kingdom of the Two Sicilies led to choices in terms of assistance, in which gender discrimination was strong, as mirror of a society with its privileges for males and its prejudices against women. Only in 1840, an ordinary State budget was started, some orphanages were created also for females and there were also some relief initiatives to take them free of charge in factories: the fate of the «projette» was increasingly placed at the forefront of Kingdom. However, the results were limited and slow and the discrimination remained strong: boys, even in the context of lack of assistance, were more safeguarded, girls were mostly ignored, whereas nurses were outraged and little paid. 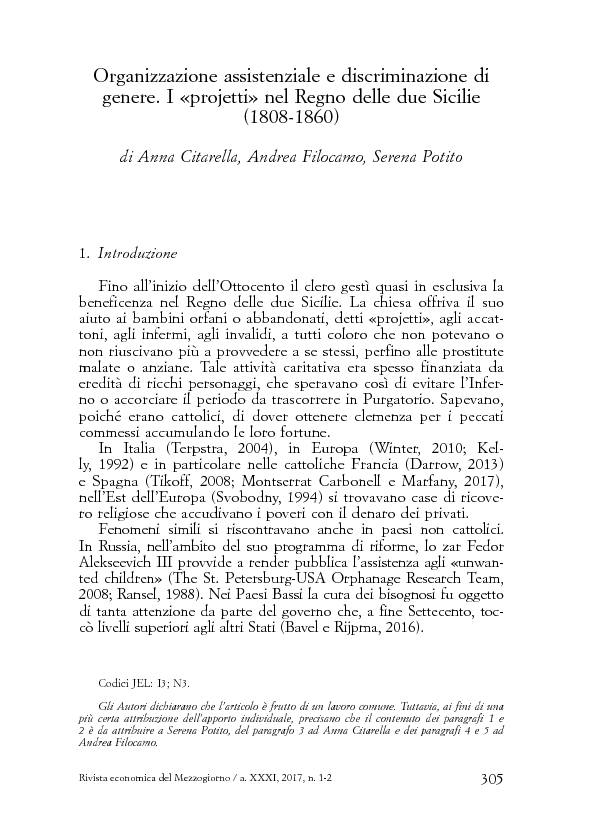