Several studies have addressed the issues concerning the ability of the Sicilian companies to hold an international competition, that is becoming more intense due to the increased integration into the world economy and the competition from other countries in advantage for lower production and input costs. Over the last years, there have been several trends relating both to the expected loss of competitiveness of Sicilian businesses and the ability of some export-oriented businesses to survive the economic crisis compared to other domestic market-oriented businesses. This is because the latter, especially the smaller ones which continue to be the main characters of the internationalization process, show a good ability to preserve and enhance their competitive advantages by engaging in significant changes in the strategic choices and partially modifying their geographical direction. In this regard, the aim of this paper is to highlight how, in the context of the internationalization of the Sicilian companies, while showing the strong limits of «light» internationalization, a group of companies,which exceed the first integration problems, is emerging, and once overcome the classic opposition export / direct investments, may contribute to a definite improvement in Sicily in terms of economic growth. On the basis of such assumptions, this paper gives an interpretation of some of the recent changes in the methods of approach to foreign markets by Sicilian businesses as well as of their future prospects. 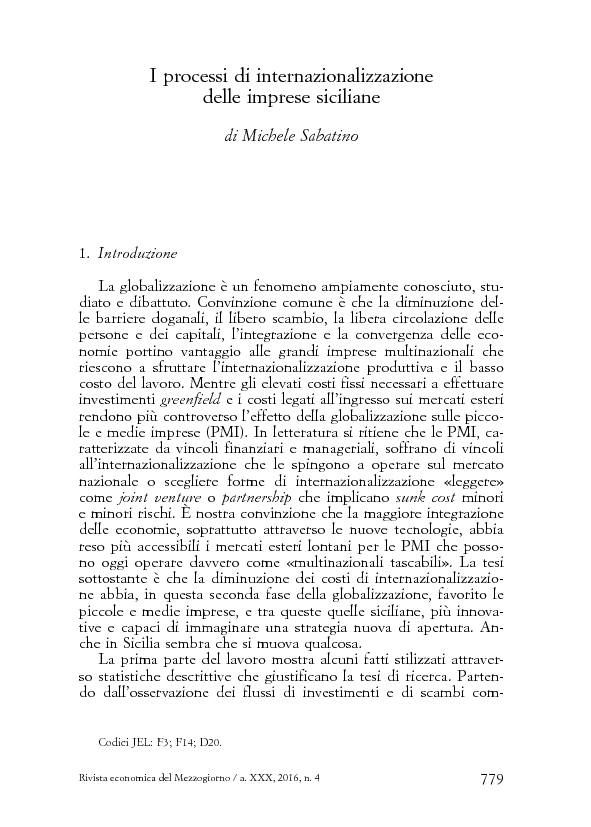