Since the 1990s, local autonomies have experienced huge changes in their functions, spending autonomy, territorial governance; this course has had some inconsistencies and has been highly influenced by changes in the international and Italian context. The two decades of the so-called «Italian transition» were characterized by structural changes to the model through which Italy had succeeded, in the late XXth century, to connect with the centre of the world economic system. However, the same evidence in recent years leads to doubt the effectiveness of the use of the term «transition» to indicate the changes of the last twenty years; such period is increasingly less like a «bridge» between an old and a new system that is not better defined, and more and more, at least from a historical and economic point of view, like a very articulate and internally diversified phase in the history of the Country, to be studied in-depth as such. In this context, in the last twenty years, local governments have reformulated the forms of support to the process of economic development, achieving mixed results in the ability to increase the competitiveness of the territories and of the Country, partly because of cycle changes, the uncertainties of the process of institutional reform and, especially in the last decade, the increasing financial constraints that have influenced in particular investment policies. This paper examines the main characteristics of this process of municipalities and provinces focusing on how the national financial budgets and the internal Stability Pact have been used to reduce the expenditure of local autonomies, including that for investments, regardless of their ability to support regional development. From different points of view, the modifications of the Stability Pact, when compared with the evolution of the Italian economy over the last twenty years, seem to have a basically pro-cyclical trend, and not anti-cyclical as it would be useful, at least for the capital expenditure, during crises. This process, in some respects, has first anticipated and then accompanied the austerity policies started at the end of the last decade. At the same time we will try to check, always in a medium to long term, the possible effects of these mechanisms with respect to the problem of the gap between the Centre-North and the South of the Country. 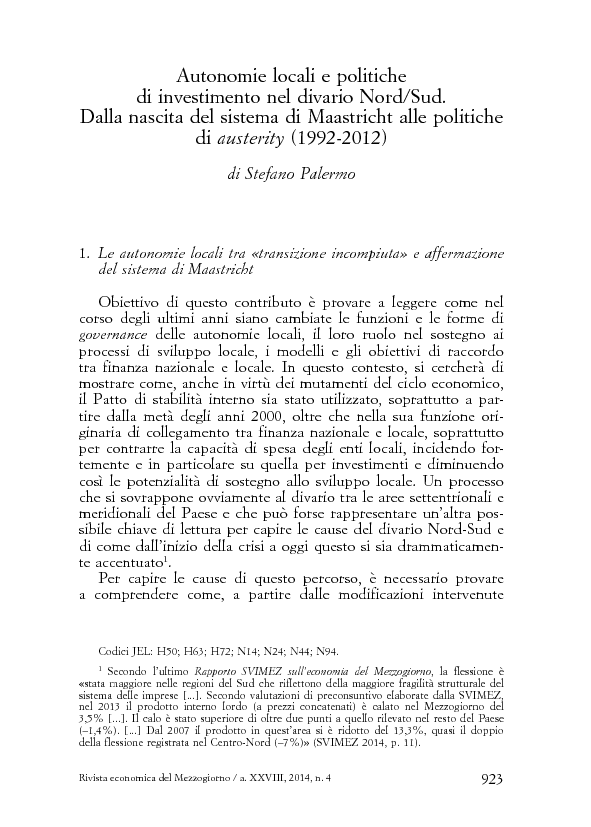