This paper presents theoretical and methodological reflections on some aspects characterizing the research in the field of urban logistics. The most important logistical problems affect not only the cities but increasingly more complex urban areas that make up in many cases metropolis without interconnection functions between different urban centres. Metropolitan aggregation in Italy and especially in the cities of the South, originated from the simultaneous acting of conflicting economic forces of agglomeration and dispersion which de facto triggered effects in terms of mobility opportunities and connections among areas of different, rather low level of urbanization. In major urban areas in the South of Italy, the lack of both coordinated policies aimed at rationalizing the demand for mobility of people and goods and logistical culture aimed at economically and environmentally governing the development of the flows is very clear. Therefore, a new planning approach should be focused on spatial rebalancing of everything that moves in more and more complex, but at the same time less interconnected, urban environments. The traditional model «centre-periphery» which connects different levels of hierarchical infrastructure, has led to the realization of radial axes of connection, underestimating the phenomena of settlement explosion of suburban areas, both in terms of residential settlements and of commercial and distribution settlements. The application of a model for the multidimensional analysis of territorial data, with reference to Southern urban areas, has allowed to develop a composite indicator, named ACIT, that is the expression and synthesis of the variables and indicators associated with individual economic dimensions of analysis. 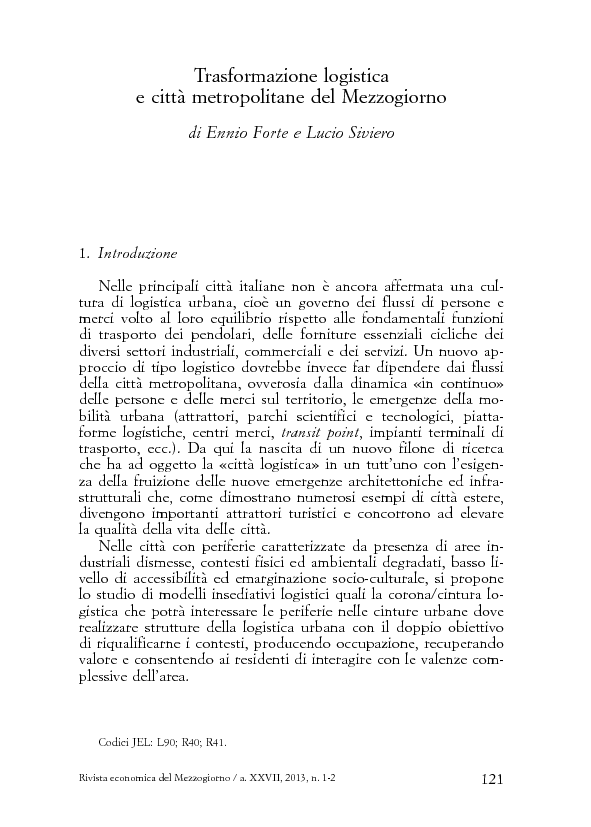