Over the first years of the extraordinary intervention in the Mezzogiorno - from 1950 to 1957 - the «Cassa per il Mezzogiorno» focused on the financing of infrastructures, land reclamation and improvement works, aimed at supporting agriculture and tackling unemployment. In the following stage (1958-1965) an industrialization policy based on «poles of development» started; it absorbed about two thirds of global spending and worsened internal gaps in an area already disadvantaged, in a not homogeneous way, at the end of the war. The effectiveness of industrialization policy in mitigating development not homogeneity in the Southern regions has raised conflicting evaluations, but the analysis of intra-Mezzogiorno regional gaps has to take note of an unquestionable general improvement in standards of living in all the Southern regions. In this perspective, the controversial results of postwar industrialization strategies in the South of Italy can be reconsidered today, in the light of their longperiod effects on social and productive structures in such regions; these effects are estimated by composite indicators such as the human development index (HDI), which links a traditional economic indicator, i.e. per capita income, to not monetary indicators, such as life expectation and education level. This index shows that, after twenty years, the situation looks deeply different both in the Mezzogiorno's converging towards this index's national average and in reducing internal gaps present at the beginning of this twenty-year period. 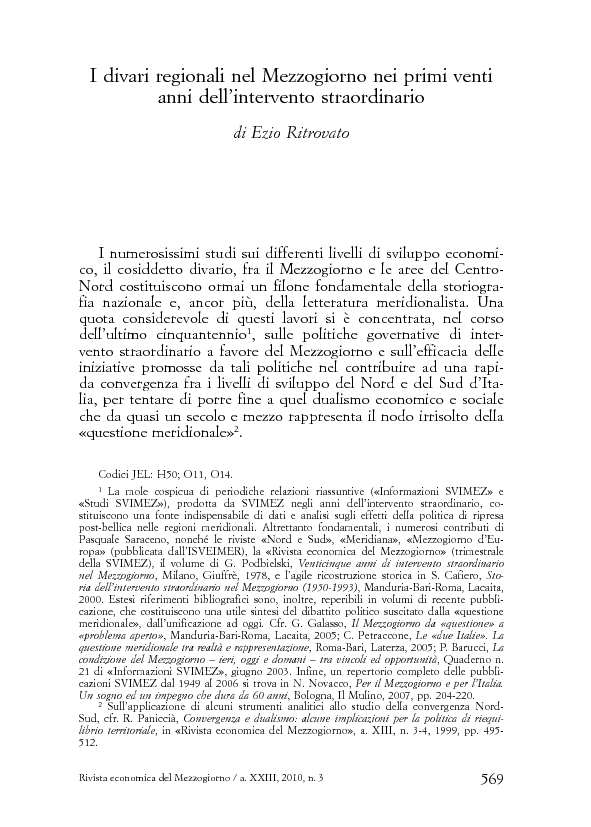