Italy's Mezzogiorno is one of the most geologically dangerous and fragile areas of the Mediterranean basin. Its main mountain range, the Apennines, reaching from the Strait of Messina as far as the area of Tuscany and Liguria, is characterized by high seismic risk, proved by recent earthquakes in Irpinia (1980), Umbria (1997) and Abruzzo (2009). In the Apennines as a whole in addition to peoples, also several villages and 780,000 historical buildings constructed before 1945 are exposed to high seismic risk. They are a valuable heritage which hand down an important side of Italian landscape identity, at the top of European visitors' preferential reasons, and a cornerstone of Italy's tourist development. Historical settlement heritage carries out also the role of identity main point for the anthropic protection of mountain areas. Therefore, some recent governmental provisions seem objectionable, since they would privilege choices linked to economic situation and to emergence arisen after earthquakes, as regards housing and town-planning policies, thus at the risk of favouring, along with the standing of new towns, the abandonment of ancient villages and lasting negligence for historical houses in the Apennines. The lack of a general strategy for facing Southern mountains protection and building renewal, as well as bringing ancient settlements into compliance with safety requirements, add to the slow accommodation of Italian aseismic rules, regularly characterized by the institution of deferment. 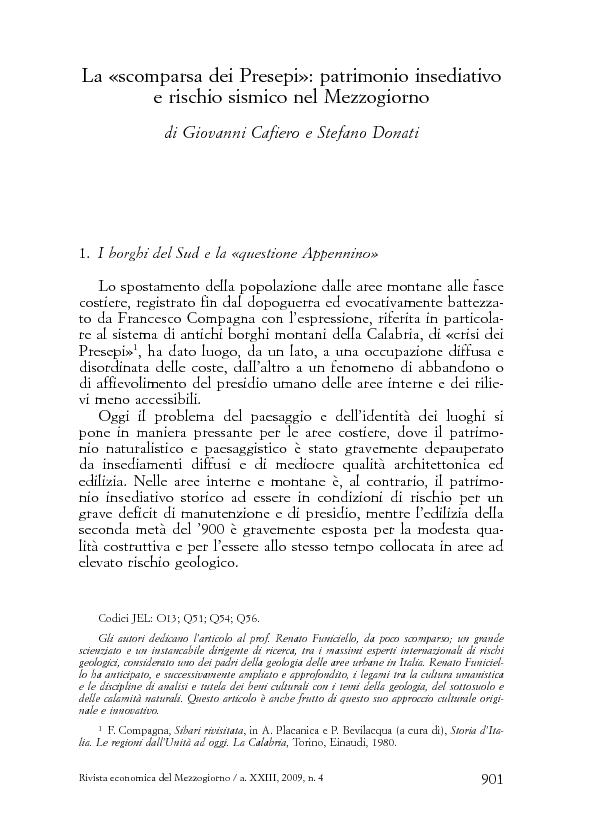