In the current situation, the structural effects of the Italian Domestic Stability "Pact" must be carefully considered. Such effects are "pro-cyclical": they worsen deflation that, after 2008 depression, is nowadays markedly ongoing. The statistical analysis already carried out shows a clear differentiation of effects on territories. In the Centre-North of Italy, a trend to the reduction of municipalities' expenditure and to the alleviation of tax burden prevail structurally. In the South of Italy, on the contrary, it appears to prevail an opposite trend. This causes a considerable reduction of the gap between available resources (such a gap, in 1999, was equal to 30% and, in the long run, it has been gradually reducing up to 10%); this reduction, both in terms of accrual basis accounting and of cash basis accounting, is the effect of a worsening of life conditions of employees, due to considerably higher taxes; such an increase of tax burden has caused a trend increase of revenue, which since 1999 has been equal to 25.4%, in terms of accrual basis accounting, in the South of Italy, compared to 16.9% in the Centre-North of Italy. Secondly, the serious risks that such a current situation entails for the financial sustainability of the Municipalities are shown. Both in the Centre-North and in the South of Italy, in terms of accrual basis accounting, a trend to deficit creation appears - actually, in absolute value, very low. But the worrying phenomenon is the failure to cover loan amortization charges, which should be covered by the system of the Consolidated Act for Local Governments (TUEL; see, in particular, article 162, paragraph 6), in the current account of budgets. 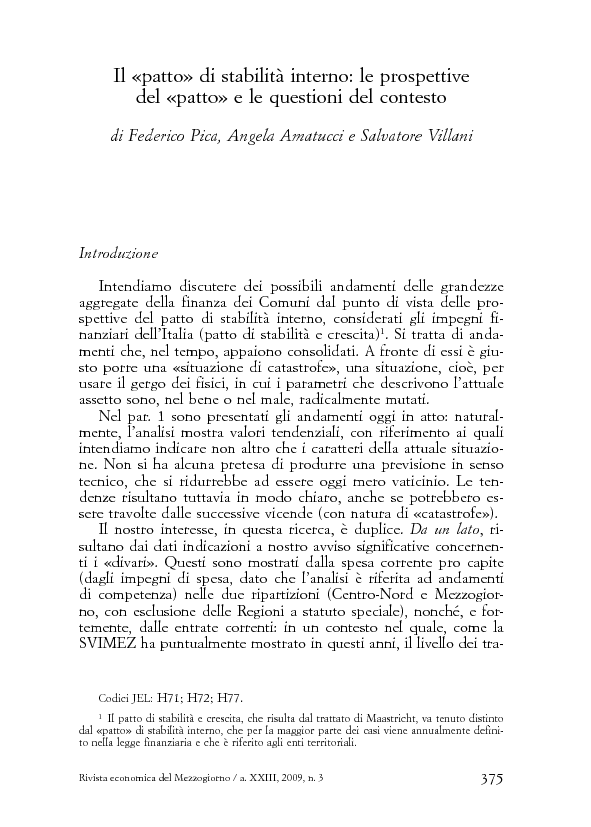