The purpose of this paper is to investigate the so-called «non-structural» separation rule (also known as «Unbundling»), provided as an exception to the antitrust law, within the meaning of Article 6, paragraph 1, of Legislative Decree No. 175 of 19 August 2016 (known as the «Madia» reform), in order to understand its effects on the business profitability of public utilities companies in Italy. In particular, the analysis is based on the interpretation of the concepts of «competition» and «services of general economic interest (sgei)», as defined in the Community Economic Order and in the light of the business economics theory. It develops and integrates the relevant theme of «structural separation», which concerns companies operating both in the sgei sector and on an economic free market segment. With regard to such principle («structural separation»), Article 6(1) of the Madia Decree lays down a provision derogating from it for the companies controlled by national or local government. A deeper analysis of the mentioned derogation reveals as both academically and practically relevant, since it appears not only to be in blatant contrast with the principle of «neutrality » expressed in Article 345 of the Community legislation (tfeu), but specifically because it risks creating a significant difference in treatment between economic operators. In particular, the paper highlights how the fair competition between sgei companies also operating in free market economic segments is likely to be altered by the unilateral obligation for companies not under (national or local) government control to sustain an expensive organizational complexity. This would undermine both their financial performance and competitive abilities, with significant impacts also on the quality of services/products offered. The study concludes by suggesting a plausible path aiming to allow a sustainable reconciliation between principles of collective economy and business profitability, regardless of the ownership structure of companies operating, at the same time, in the both business segments (sgei and free market). 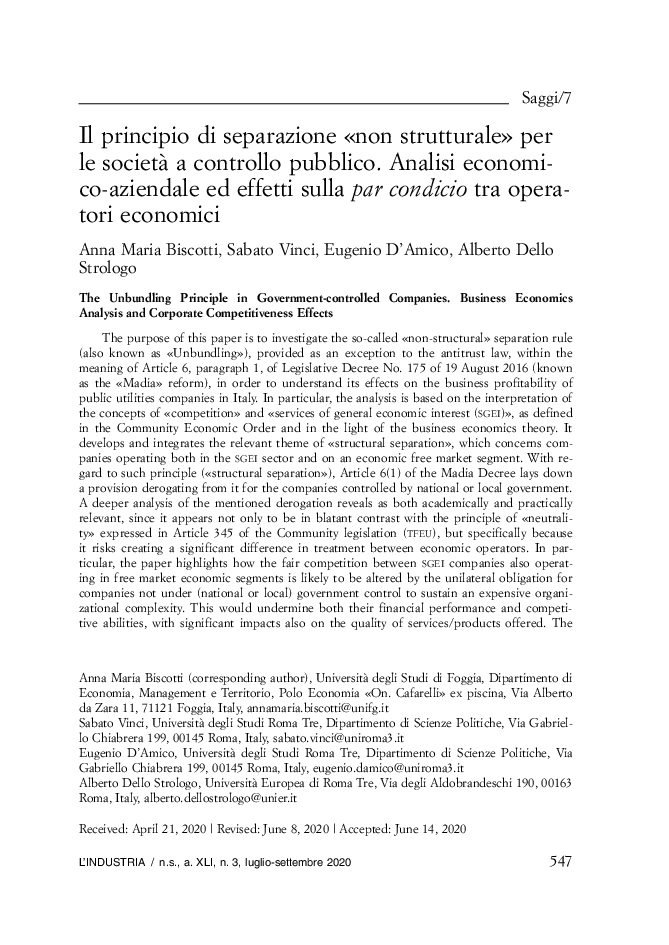