Germany, Italy, and France are – in that order – the three largest manufacturing powers in Europe. But when we measure things not by «manufacturing value added» but in terms of «knowledge-based investments» (i.e. r&d, human capital), which are an excellent indicator of how well-positioned an industrial system is for moving ahead into the future, France overtakes Italy’s second spot. Starting from these rankings, this article sheds light on the new European industrial policy from two different perspectives. First, from the viewpoint of the eu as a whole, presenting a brief summary of the primary eu initiatives that were implemented from 2002 to the present by the European Commission (the so-called «integrated approach» that simultaneously incorporates horizontal measures and vertical applications). Second, from the perspective of the three individual Member States, with particular attention paid to the industrial policy strategies undertaken (or not undertaken) by Germany, France, and Italy within the larger European context. This comparative analysis shows the weaknesses of Italy in terms of policy, with the one exception of the «Piano nazionale Industria 4.0». At a time when it is more and more important to embrace the technological frontier, Italy’s position as the second largest European manufacturing powers is not something we can take for granted: in order to preserve it, both a significant increase in knowledge-based investments and an adequate intervention in key enabling technologies would be necessary. This Italian weakness in terms of strategic policy action is in stark contrast with the wide-ranging studies carried out over the past 10 to 15 years in our country by industrial economists, who have contributed notably to the national and international literature on the new industrial policy. 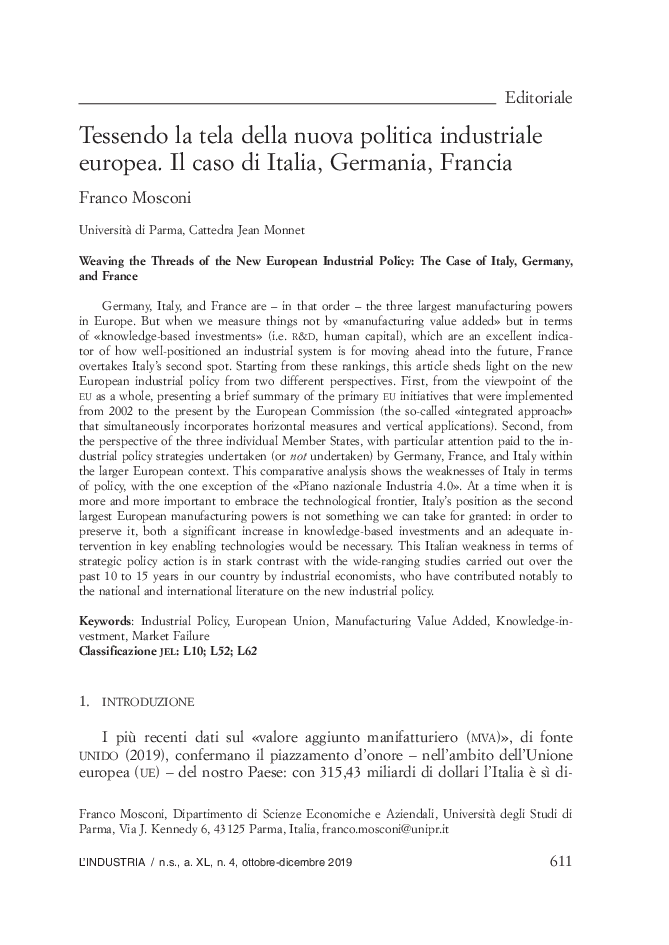