The object of this study is the "liner shipping industry" (liner container transport) in its dimensions as an international industry and with reference to the particular situation of the Mediterranean and of Italy. Emphasis will be placed on the new tendencies characterizing the developmental model of this industry, which is evolving towards an oligopolistic structure. Specifically, attention will focus on: 1) the "hub and spokes" model, which stresses the drive by the large "liner shipping Companies" to acquire ever greater market shares; this offensive is based on gigantism in ship size, economies of scale, acquisition of terminals, control over terrestrial legs, all of which constitute factors requiring heavier and heavier investments; 2) the development of a Tayloristic organization for ships, terminals and ports based on the "commodisation" of containers, investment in "information technology" and automation. This organisation is also accompanied by a Toyotistic type of organization, as the result of a segmentation of demand; 3) the fact that the consolidation of the "liner shipping Companies" is reinforced both by their independence from national regulations through the IMO regulations and also by the erosion of power of the "Conferences", even though in Europe the latter have been exempted from "anti-trust" regulations; 4) the development of the hub and spokes model dominated by the large international companies, exemplified above all in Italy; 5) the structure of the industry in which the large liner shipping Companies operate, which is evolving towards an increasingly concentrated oligopoly. However, a competitive structure based on specialization still remains for a substantial group of minor "liner shipping companies", and this group includes the Italian companies. 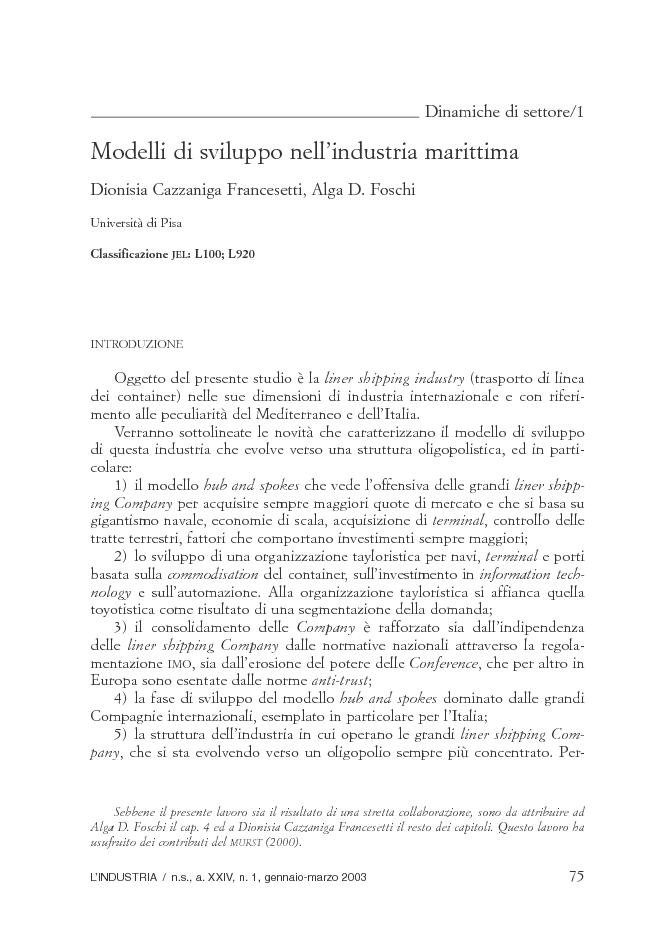