This article analyses the origins of the industrialization process in Italy after the Unification of the country till the beginning of the new century, when Italy had its first industrial boom (1861-1911). The Count of Cavour, the Prime Minister who leaded the country to a rapid Unification, delivered his last parliamentary speech on the economic policy of the new kingdom (27 May 1861). He proposed a liberal vision of free trade, but regulated by the state in order to allow weaker firms to adjust internal division of labour to the changed extent of the market. The following debate (Cavour died after a week, 6 June 1861) was on the reorganization of the state and on the sustainability of a free market policy for a last comer country. After the long government of the Right party, based on free trade, but in a deflationary economy, the Left Party won the election (1876) pushing the economy through a more effective protectionist policy, but generating increasing disparities between the Northern regions (more focused on industrial activities) and Southern regions (based on a feudal agriculture). In the last twenty year of the century the debate was among marginalist academic economists, writing on «Il Giornale degli economisti», and the applied economists and industrial engineers, who wrote on «l'industria», a journal more oriented on the German historic school. After a prolonged period of crisis, at the beginning of the new century Italian industry started a positive cycle, which ended with the World War. The article explores the roots of various problems, like the disparities between North and South, the role of small firms, and the emerging role of the state in the economy, still relevant in the present Italy, using an approach of political economy. 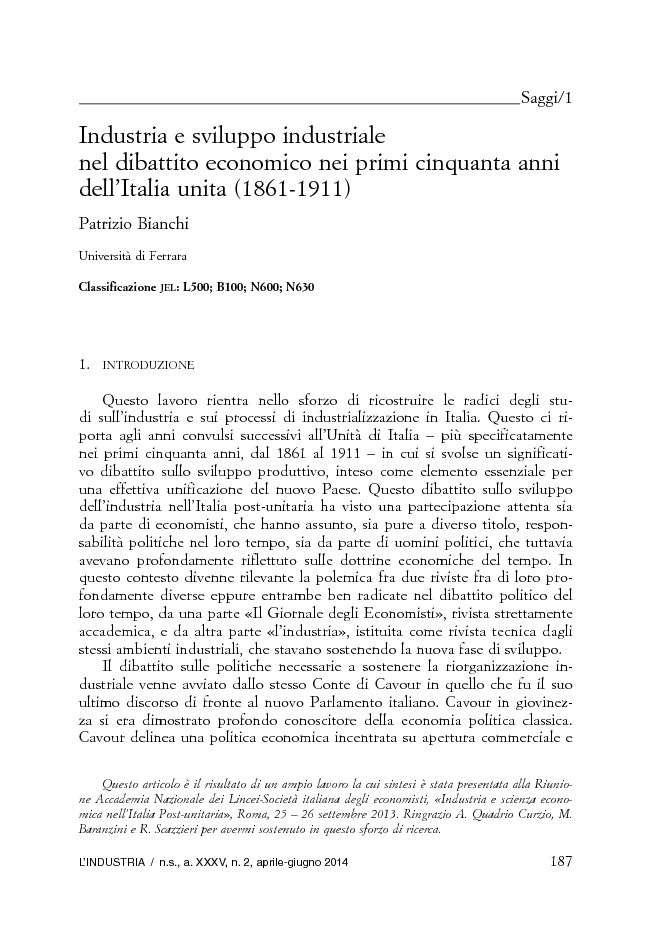