This paper provides an opportunity to test three regulatory capture theories against the incomplete liberalisation reform of the Italian energy markets. The incomplete privatisation of the incumbents ENEL and ENI set a trap to the liberalisation reform and at the same time offers an excellent test-bed for theories of regulatory capture, applied to decisions taken by the government rather than to the ones taken by the Independent Regulatory Agency (IRA). The conflict of interest arising from a state that is both regulator and shareholder risks to undermine the entire liberalisation reform, and emphasizes the need of an IRA able to deliver a credible commitment to investors and to guarantee a 'level-playing' field to competitors through a costreflective tariff system. The Italian government has enthusiastically embraced the paradigm of competitive markets, implementing institutional reforms that went beyond what required by EU law and giving the Autorità strong regulatory powers. However, at decisive moments it has undermined the credibility of the liberalisation reform, either through interventions that directly hindered competition or by reducing the powers of the Autorità. This puzzle is explored through the prism of three theories, each of them shedding a different light on the case study. The Theory of Economic Regulation put forward by Stigler (1971) shows how government has often protected the interests of producers, first of all ENEL and ENI, at the expense of competition. However, it is through Peltzman's More General Theory of Regulation (1976) that it is possible to understand the decisions that did not favour producers and why the tariff system is still pervaded by heavy cross-subsidization. Finally, the Politics of Regulation as developed by Wilson (1980) squares the circle. It clarifies that the incomplete and asymmetric liberalisation of the energy markets is not the simple reflection of the dominance of producers or other interest groups, but is largely shaped by the role played by ideas - specifically the policy-makers' degree of trust in competition itself. The paper confirms the explanatory power of each of the three theories adopted, but also suggests that they need to be combined in order to completely understand energy markets regulation. 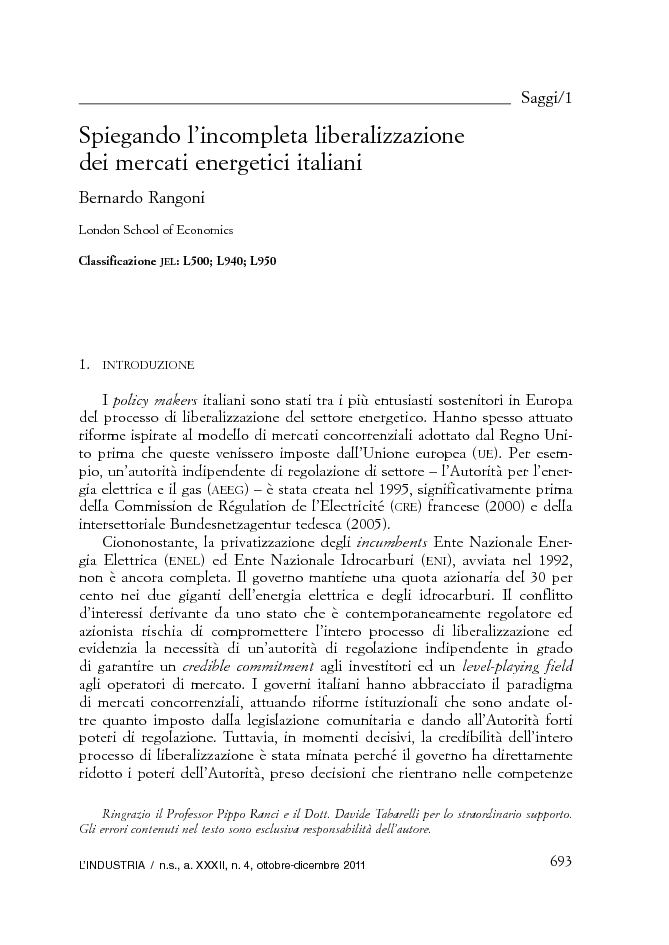