Capital Structure plays an important role in regulating public utilities firms due to the interaction between investment and financial decisions and the level of regulated prices set by Regulators (Teisberg, 1993; Spiegel, 1994; Spiegel e Spulber, 1994). The main theoretical result shows that the regulated firm's capital structure has a significant impact on the regulated price, with the firm choosing its debt and equity levels strategically to affect the regulator's decision. Despite its importance, the empirical evidence is quite limited and US based (see, e.g. Lyon and Mayo, 2005). In this paper, we couple Italian sectoral data with firm level data from the four largest public utilities companies - ENI, ENEL, AUTOSTRADE and TELECOM - to conduct a descriptive analysis of the interrelation between leverage, price, profitability and investment rate. In the Nineties, privatisation and liberalisation of public utilities were introduced almost at the same time and Italian regulated firms faced a complicate setting which we take into account when deriving our predictions. Following the theoretical framework, we expect that when the firm is fully privatised and supervised by an independent authority: i) leverage increases; ii) investment does not fall; iii) profitability increases, suggesting an increase in the tariff rates. Our findings suggest that both the intorduction of the regulatory regime and the nature of ownership (public vs. private) matter for the choice of the capital structure. Regulated utilities are more leveraged than unregulated firms and appear to invest less. The investment rate began to decrease in the post-privatisation/liberalization years. Private regulated utilities indicatively exhibit lower capital accumulation and higher leverage than state controlled utilities. Leverage peaked just around the change of ownership from state to private. Profitability is quite high at regulated firms in Italy, independently of ownership. 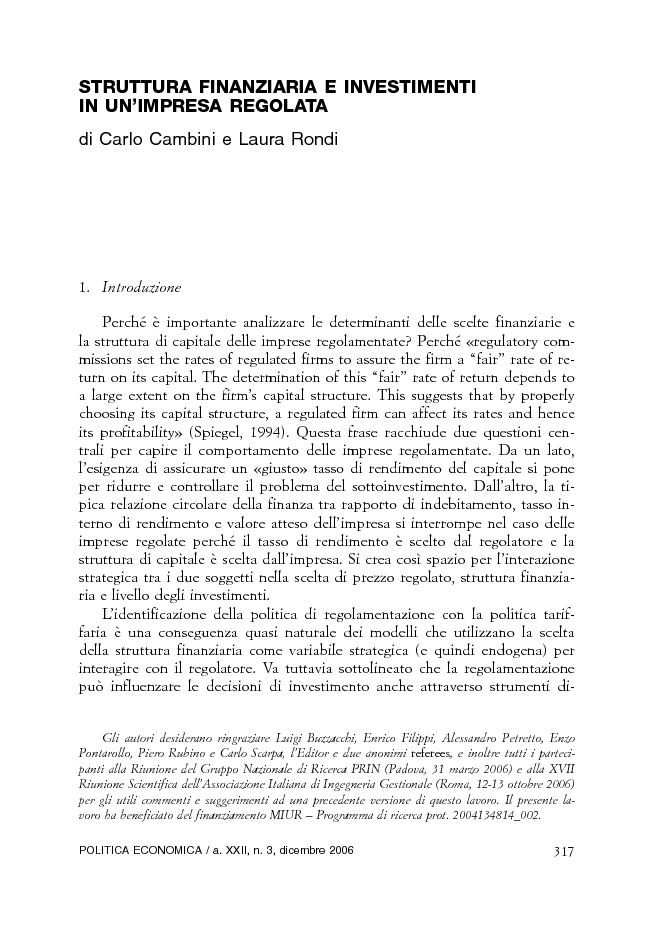