Bruno de Finetti gave many important contributions "to" economic theory and "on" economic theory. De Finetti's main contribution is his own concept of probability, which is both an answer and a critique to the question put by J.M. Keynes: "[Under uncertainty] there is no scientific basis on which to form any calculable probability whatever. We simply do not know. Nevertheless, the necessity for action and for decision compels us as practical men to do our best to overlook this awkward fact and to behave exactly as we should if we had behind us a good Benthamite calculation of a series of prospective advantages and disadvantages, each multiplied by its appropriate probability waiting to be summed". Unfortunately, a policy - oriented economic theory seems to be incapable of adopting a Ramsey - de Finetti concept of probability. This is the first topic briefly discussed in this paper, the others being de Finetti's (and Ettore Majorana's) refusal of determinism after the developments of physics in the 20's; de Finetti's critique of the (mis)use of mathematics in economic analysis; of the asserted neutrality of economic theory; and of econometrics as play-o-metrics. On this issue, de Finetti's point seems to be the same of Keynes's point, when Keynes argues (against Tinbergen) that "One has to be constantly on guard against treating the material as constant and homogeneous in the same way that the material of the other sciences, in spite of its complexity, is constant and homogeneous. It is as though the fall of the apple to the ground depended on the apple's motives, on whether it is worth while falling to the ground, and whether the ground wanted the apple to fall, and on mistaken calculations on the part of the apple as to how far it was from the centre of the earth". 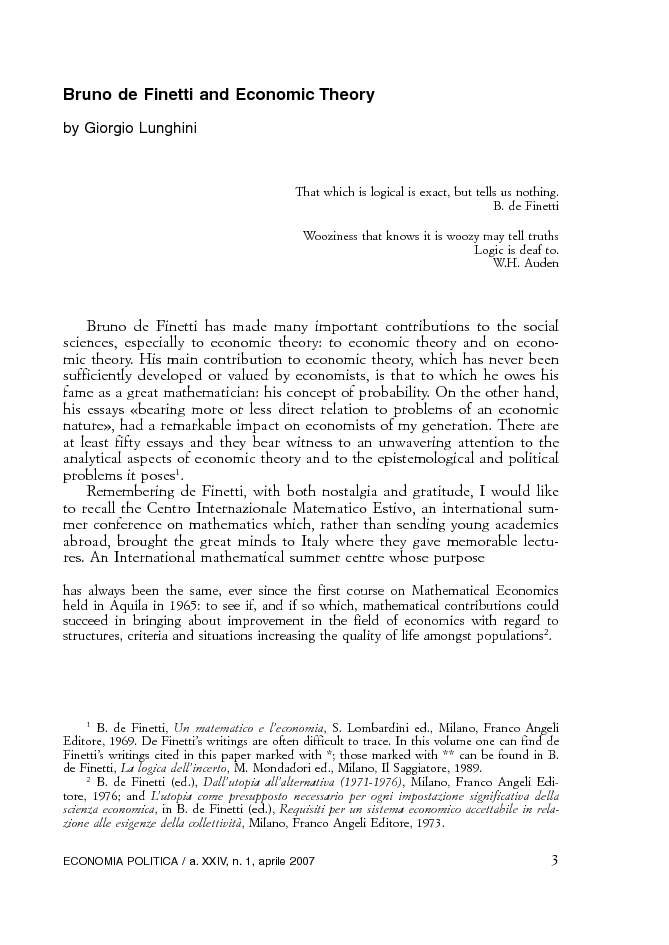