This paper explores the links between the re-opening of the Italian and other European economies, their balance of payments, and the choice of a strategy for economic reconstruction at the end of World War II, throught an analysis of the work and activities of the Italian economist Bresciani Turroni. The paper firstly discusses some archival materials, shedding light on a relatively unknown, important episode in American-Italian relationships at the end of the war, in which Bresciani Turroni took part as an advisor to the Italian government in 1945. Secondly, it presents a simple economic model illustrating the macroeconomic framework underlying Bresciani's contributions as a policy maker and policy advisor in that context. Costantino Bresciani Turroni is well known internationally for his book on the German hyperinflation in the early Twenties, a reference that no serious scholar in monetary economics can ignore when dealing with the origins and dynamics of inflations and hyperinflations (Bresciani Turroni, 1931). Less well-known are his role as a policy advisor and policy maker at the end of World War II, and the contributions that the made to the debate on the reconstruction of Italy and its position as an open economy in the new world economic order. My objective in this article is to illustrate his response to the challenges and policy choices facing Italy, and to some extent Europe and the world, in a period when the lines of the new international economic order, as well as the role of individual countries within it, were still under discussion, and basic choices were still in the making. 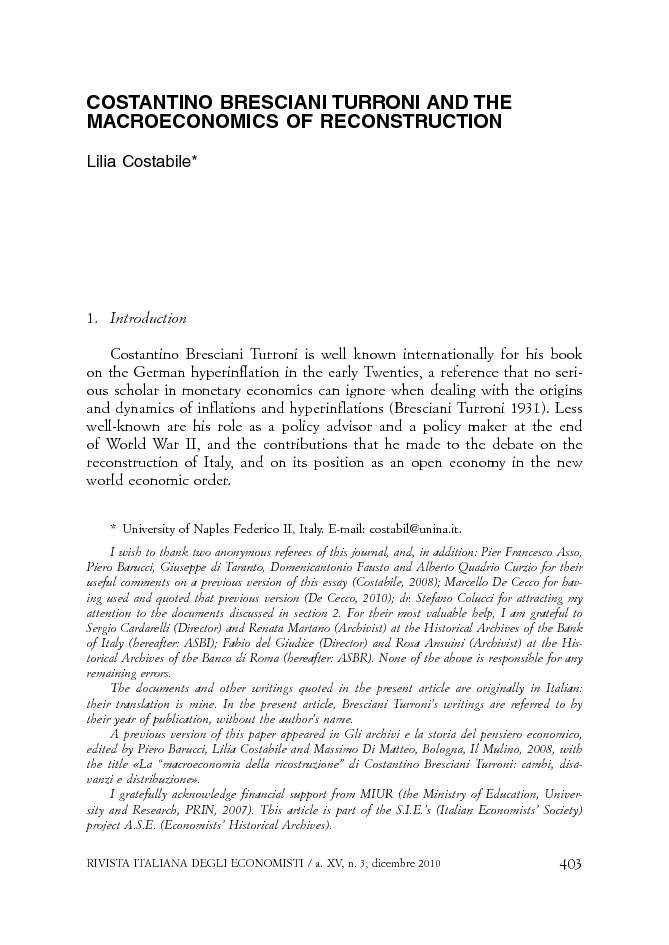