We use a stochastic frontier production model to estimate the technical efficiency of the 21 more industrialized countries in the world for the wide period from 1966 to 2007. A Cobb-Douglas function with labour and capital as inputs, GDP as output and an efficiency term with exponential distribution appears to work good from a statistical point of view. This model estimates the efficiency score of the 21 countries in a bayesian approach. The bayesian way, applied via Gibbs sampling, is here useful to avoid problems about the small number of observations. So, each efficiency score is obtained as mean of 10,000 draws. The results underline a general and progressive efficiency reduction with a disappointing rank of Italy (16-th at 1966 and 15-th at 2007) and a very bad position of Greece against better ranks of USA and Luxembourg. It is interesting to note the worsening of Japan between 1966 and 2007 but also the strong improvement of Finland and Ireland. Besides, the decomposition of the GDP growth shows the prominent role of the input changes, a smaller but positive effect of the technical changes and a small and, in general, negative effect of the efficiency changes. In short, the Italian position reveals the presence of a worrying condition about the economic decline of the Country. This suggests an indispensable and deep action to invert this dramatic state. 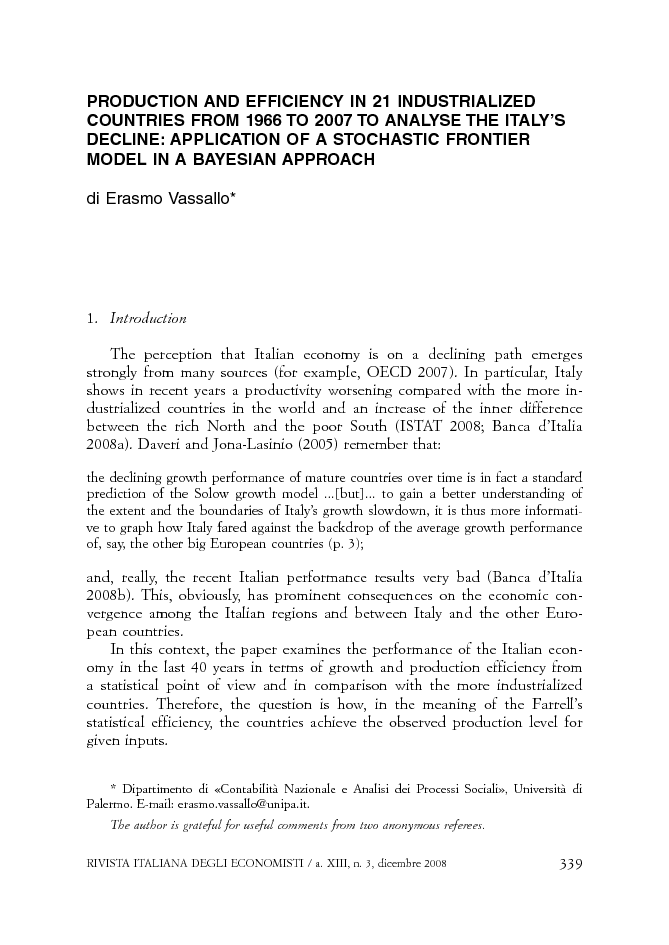