Since its inception in the late 1950s and for about three decades the process of European integration (EI) did not significantly interfere with the logic of functioning of the nation-based welfare states. EI had essentially to do with "market making" at a continental level. Solidarity, redistribution and social justice only concerned national communities and remained essentially a business of national governments. The 1990s have however witnessed the emergence of increasing strains in the relationship between "Europe" and "solidarity". With its emphasis on sound budgets, competition, market promotion, free circulation etc., EI has increasingly transformed itself as a source of "threat" for the national social models. Competition rules and the four freedoms have started to interfere with various domestic practices of social sharing. This logic of "opening" tends to clash with the logic of "closure" which historically inspired the formation of welfare states and which still largely underpins their programs today. The tension between the two logics is clearly revealed by opinion surveys. So far, the "tightening" of the link between EI and the nation-based welfare state has been promoted by the former ("Brussels"), privileging "market making" and insisting on the need for reform and "modernization" of traditional social protection schemes at the domestic level. But some adaptation is needed also on the side of EI, i.e. of its overall mission, institutional logic and constitutional framework. This is admittedly a difficult task, but it is not beyond reach. The paper suggests a number of strategies for reconciling within the EU institutional framework the reasons and "logics" of the two prime drivers of progress on the European tradition, i.e. the marketplace and the welfare state. 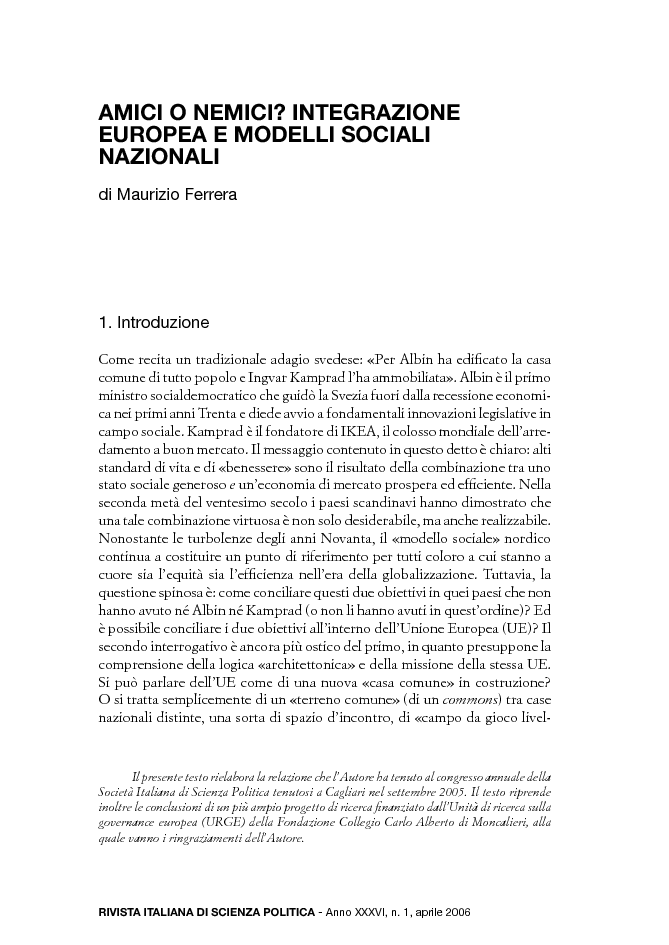