Why are we in the entangled chaos in the advanced world, in particular in the US and UK? It is argued that neo-liberalism is at the core of the explanation, but in a complex way. Some major «liberalizing» framework change was needed in the 1980s and 1990s to loosen the protective hold of large Fordist corporations and established financial institutions to enable the changes the ICT revolution held out to take place; this was Thatcher’s strategy and bitterly opposed by much of the British capitalist elite. The paper focusses on the US (and the UK in minor key) as the driver of radical innovation. Over time major problematic pathologies have emerged in the neoliberal agenda. It is argued that these pathologies are responsible, directly and indirectly, for most of our contemporary problems: for deep segregation in British and American society, especially between large successful cities and smaller urban areas, between graduates and non-graduates, and in public services; in the growth of inequality; for the steep slowdown in innovation, productivity and real wage growth (especially in the UK); for development of populism; and for the current nervousness over AI. The core problems, it is posited, stem from the withdrawal of the state and the over-reliance on markets. Examining the different aspects of the neoliberal agenda, the possibility of a Polanyian double movement is discussed; and in this context the (ambivalent) role that democracy may play is discussed. 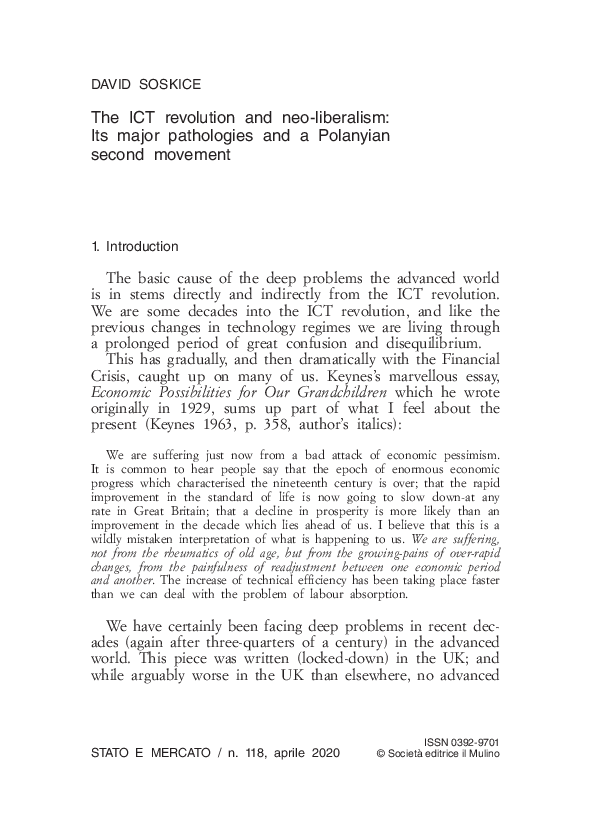