Irregular employment of migrant workers is usually considered a consequence of their illegal stay in the receiving country. The Italian case does not confirm this connection. It is true that almost all migrants entered Italy without a permit of stay and for work and were forced to take not registered jobs. However, even when they were legalised and were entitled to regular employment, a large proportion of them went on working in the underground economy. This peculiar situation can be explained mainly by the huge and well rooted Italian domestic underground economy. In a world where national borders are more and more strictly closed, Italy exerts a special pull effect on those migrants who are prone to accept illegal staying and irregular working conditions, as migratory chains transmit the image of a country where staying and making money is easy, even not holding a stay permit. Nevertheless, if migrants cannot be said to have created the underground economy in Italy, they do contribute to its continuation as they supply the suitable labour. On the other hand, the large incorporation of migrants in the underground economy prevents their settlement, because they are required to have regular work in order to renew the permits to stay they achieved thanks to the legalisation process. In most jobs irregular migrant workers replaced a domestic labour less and less prone to accept them, in others they are complementary. The area of real competition with domestic labour is relatively narrow also because migrants are increasingly living in the Centre-Northern regions, which are near to full employment for manual labour. However, the fact that the demand for migrant labour comes mainly from the underground economy has a negative impact on Italian society, which does not recognise the economic contribution of migrant workers. Measures aiming to make migrant workers emerge from the underground economy had only partial and temporary success, as the last legalisation campaign showed. It should be necessary to seriously address the issue of the domestic underground economy, but this is a long way off. 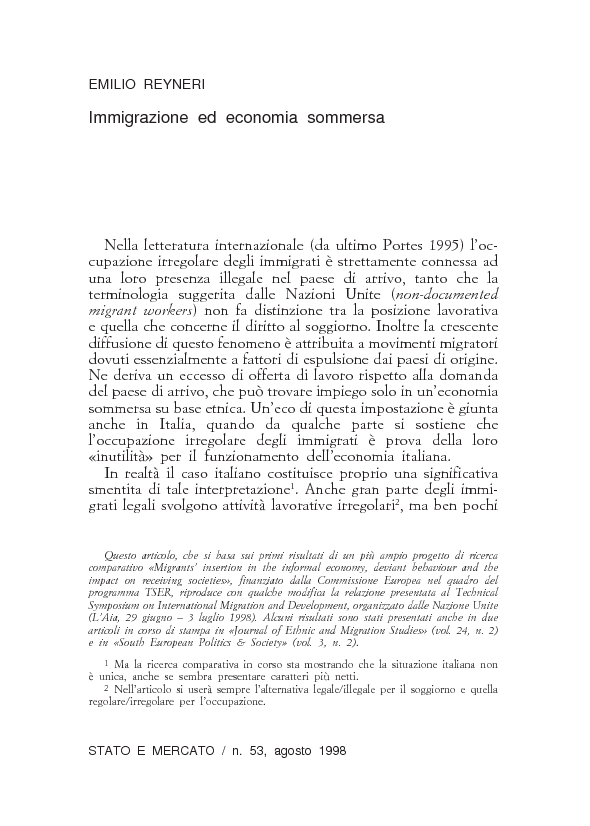