Despite having succeeded in passing important and even epochal reforms (health care, financial sector) and avoided the US economy falling in a depressive spiral, the Obama Administration and the Democrats were heavily punished at the mid-term elections of November 2010. What went wrong? This article argues that by choosing a strategy aimed at fighting the global financial crisis while pushing forward major economic and social reforms may have overstretched President Obama's political resources. As a result, the compromises that his Administration reached with Congress to ensure that both strands of the strategy would go through weakened somewhat the content of the reforms, and, more importantly, limited and distributed poorly the resources allocated to the anti-cyclical response to the crisis.When in spring 2010 the fiscal stimulus started to fade, the private sector was not strong enough to keep the growth momentum of the previous quarters and the economy slowed markedly. With an unemployment rate uncomfortably close to 10%, the housing sector still in trouble and little perceived benefits from the reforms that were approved (for instance, most of the implementation of the health care reform will take place after 2013), the electoral defeat of November 2010 could not be avoided. Ex-post, it could be argued that a more focused strategy, based mostly on measures to support the economic recovery and the reform of the financial sector would have been more effective and electorally rewarding. However, by pursuing a more ambitious strategy, Obama succeeded where all post-World War II Democratic Presidents failed, namely to provide health care universal coverage, which Edward Kennedy considered «the great unfinished business» of the US society. Only the presidential elections of 2012 will tell whether this strategy, despite its drawbacks, was ultimately successful.Looking forward, bringing unemployment down while consolidating public finances will be the two major economic challenges that the Obama Administration will have to tackle. In the next two years this task will be made particularly difficult by a bitterly divided Congress that will limit significantly its margins of maneuver. 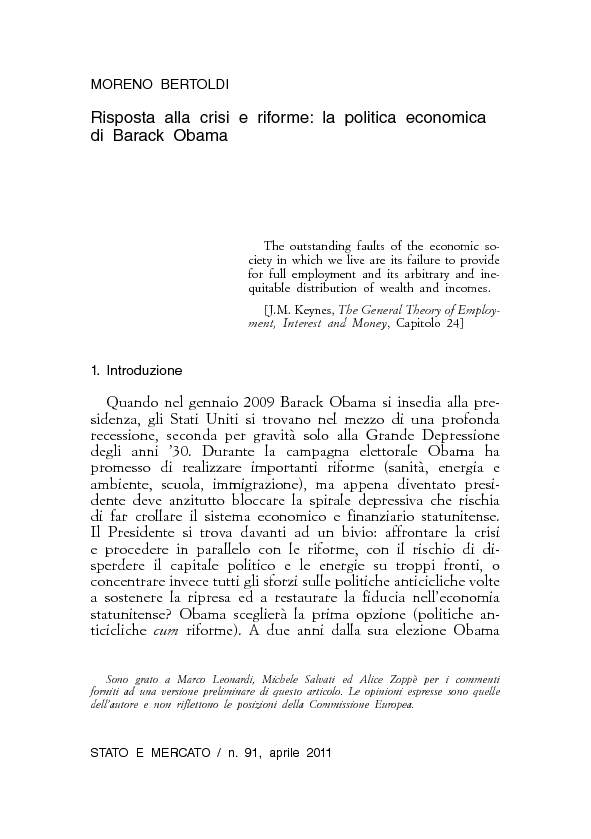