This article is about how economics, sociology and history tackle the phenomenon of elites (in the Mosca-Pareto definition) and, more in general, of ruling classes, in the C.W. Mills use of this concept. Political Science is left out because, in the conference where this paper was presented, another author was exploring this field of studies, the one in which the phenomenon of elites is of paramount importance. The final section of this article, however, deals with a problem of political philosophy of the normative theory of democracy, more precisely: whether it is possible to consider elites as the "valentior et sanior pars" of the community they rule, concluding with a negative answer. The analysis is rather short about economics: mainstream neoclassical economics rules out the problem of elites from the onset, since agents don't wield power, whereas the concept of power is central in this kind of study: they do choices, based on the resources they command, and guided by their utility functions and the price of goods and services, the whole set being given. The concept of power, instead, is central in sociology, and article provides a short survey of the main sub-fields of research on elites that can be found in this discipline. The focus of this paper is really on history, this discipline having been - since its ancient Greek origins - a continuous narrative of the elites. Now it is not so, but the study of the elites - and the methodological problems it involves - are still very much one the forefront. In this article these problems are mainly exemplified through the author's own research in the area of Italian (and comparative) economic policy-making. 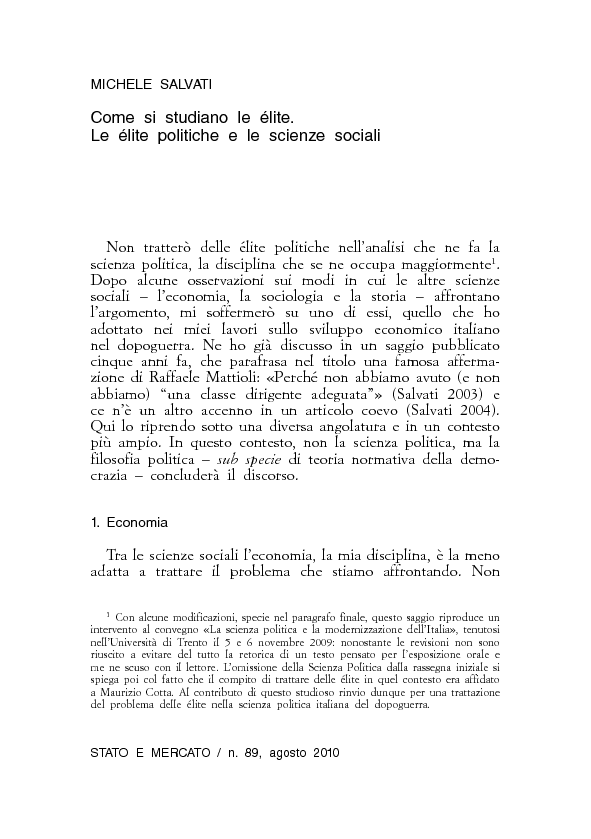