In the 1980s and 1990s most of the European healthcare systems carried out reform programmes which shared the same general principles, raising the issue of convergence among them. As to National Health Services (NHSs), after 2000 common trends have partially continued, but many differences emerged among the Nordic NHSs (United Kingdom and Scandinavian countries) and Mediterranean NHSs (such as Italy or Spain). In order to investigate these new tendencies, this paper analyzes the recent evolution of the Italian and British NHSs, focusing in this latter case on England, as examples of the two above-mentioned groups of NHSs. Focusing on dimensions such as the provider-purchaser relationship, the supply structure and the "performance" management systems, it is possible to show how, beyond a superficial convergence, differences between the English and Italian NHSs are persistent and deeper than they were at the end of the 1990s. This can be explained by considering several factors, such as the priorities existing in the two healthcare systems, the importance of prevailing ideas in the government elites, or the different government structures. However, it should be highlighted that some long-term factors have reemerged; such factors, as they are found in England and Italy, are typical of the Nordic and Mediterranean welfare and healthcare systems respectively, and concern the kind of relationship existing between politics and healthcare and the strength of bureaucracies. 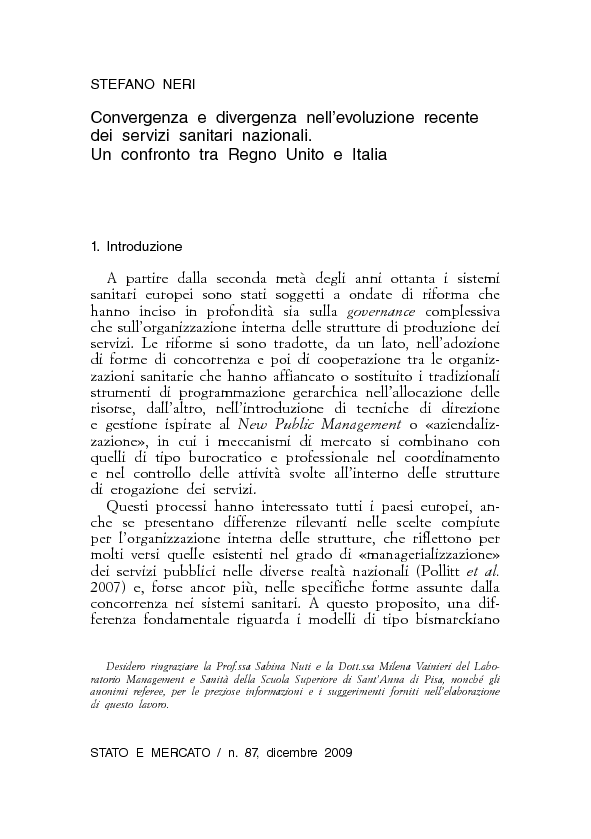