The aim of this article is to discuss the relationship between economic sociology and economic policiespolicy. In the last decades, economic sociology has made significant achievements in terms of theory and research, but its influence on policies policy has remained weak. While this was inevitable in earlier decades, when scholars had to concentrate most of their effort on defining the role and contribution of economic sociology, it has since become a constraint for the institutionalization and recognition of the discipline. The return to economic sociology, since the 1980s, has brought about important theoretical achievements, especially in the analysis of economic organization at the micro level in terms of social and cultural embeddedness. The role of social relations in contemporary economy has clearly emerged, but its implications for policies to promote economic development have remained more latent so far. Although a weaker institutionalization and a poorer connection to policymaking certainly affect the political influence of economic sociology in comparison to economics, the paper focuses on the research perspective. A shift of the research focus from the statics to the dynamics of economic organization could be useful. In this framework, particular attention is drawn to the study of local development and innovation through a closer relationship of economic sociology with comparative political economy. A separation between these two approaches does not favor a full exploitation of the potential contribution of economic sociology to policies. 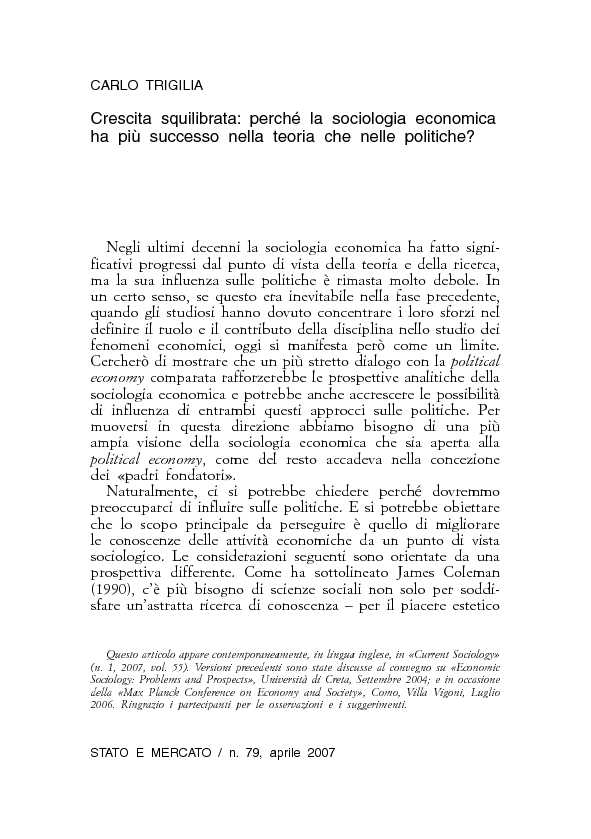