The historical variations in the relationship between the state and the family and the definitions of public and private responsibilities with regard to the needs of "dependent" individuals on the basis of age, generation, gender and degree of kinship are the issues discussed in this paper. Two aims form the focus of the article. First, it opens the "black box" of the family in welfare state analysis. To this end it provides a new theoretical perspective for analysing social policies in mediterranean welfare states. It introduces fully the family in the analysis of social policies, focusing not only on gender, but also on intergenerational and kin relations. The second aim of the article is to testify the validity of the previous argument by providing some empirical examples. To this end the author illustrates the way in which social policies and legal norms have defined the family in two mediterranean countries: Italy and Spain. The main findings of the analysis of the Italian and Spanish cases, in historical and comparative perspective, are that in these two countries social policies, fiscal policies and family law have incorporated and extended concept of family relationships. In particular, the male breadwinner family model which informed the assumptions underlying social policies and legal norms in most other European countries was of much lesser importance in mediterranean countries. Rather, in these two countries, the principle of the male breadwinner family model had always been "stretched" to include a "family/kinship solidarity" model. This model was based on a set of assumptions about the existence of intergenerational ties and kin solidarity throughout the life course and between households, and these assumptions were incorporated at the level of prescription in social policies and laws. 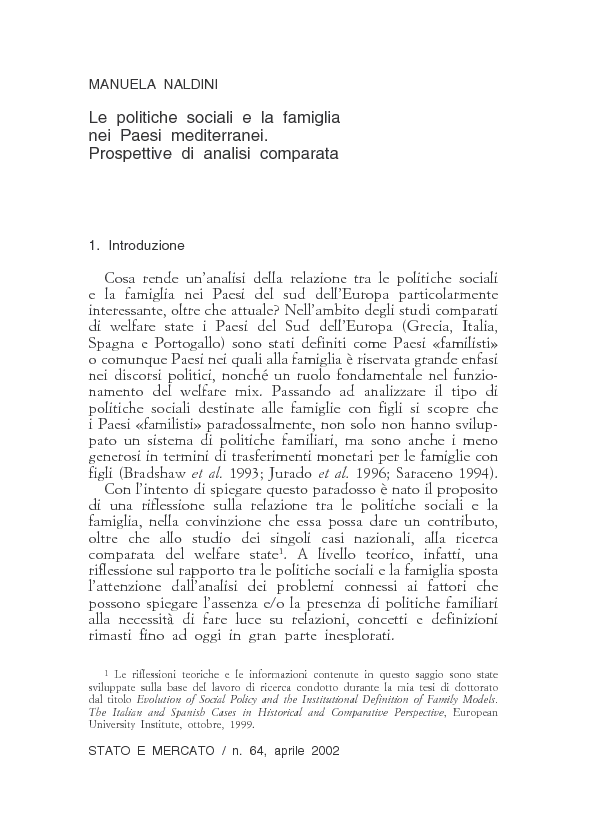