The role of large firms represents a secondary line of research in the local development literature with respect to small and medium-sized firms (SMEs) embedded in a geographically and historically delimited area. This work comes back precisely to forms of local development featured by driving large firms. Specifically, we aim at proposing an original view about them, helped by the analysis of the province of Cuneo as an exemplary case of a hybrid model of polycentric local development. At the morphological level, the model contemplates, firstly, the hybridization between the industrial district organization based on systems of specialized SMEs and that of areas where large firms have a dominant role. Secondly, the model is polycentric and territorially hybrid because it refers to a territory made of a set of local productive systems both showing different but overlapped specializations and sharing a common sociocultural and institutional background, without including a large city to which the other localities are dependent as in the typical model of the city region. Our analysis, based also on the results of a large survey on the corporate welfare practices in the area, allows to unearth such polycentric and hybrid structure. The vitality of this structure is supported by a territorial identity backed by rural, entrepreneurial and institutional common traditions, a driving role played by some large locally anchored firms, like Ferrero and Miroglio, which expose strategies of shared value referring to an Olivettian communitarian heritage, and a political sub-culture coherent with the support to both autonomous processes of local entrepreneurial, work and civic mobilization and the preservation of the large firms’ anchoring. The analysis also suggests some more general considerations on a logic of local development that combines the decentralized reproduction of local social capital of the typical district model and the anchoring of large companies that adopt consistent communitarian strategies of shared value in the place. 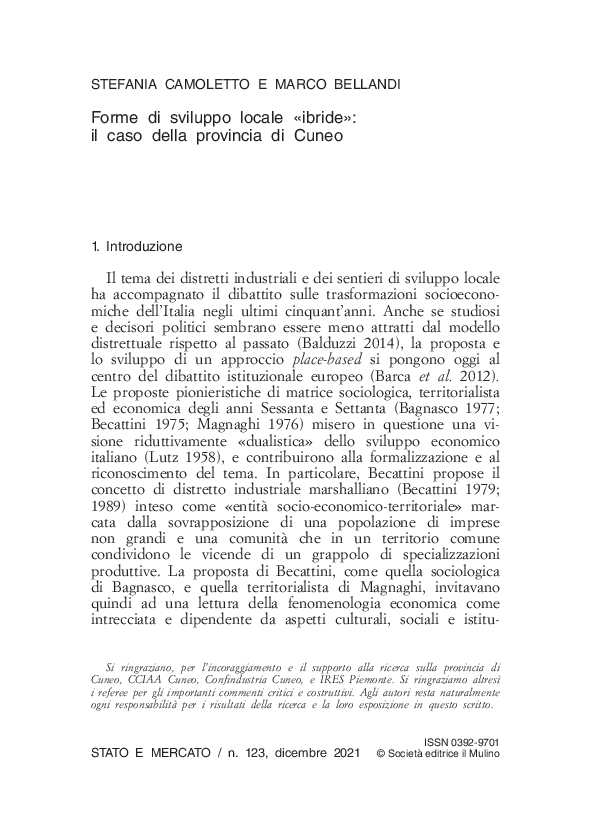