The protest against the alleged introduction of gender ideology in Italian school proofs to be still lively. Its current phase is characterized by an ongoing mobilization activated mostly at local level. Following the call for action of anti-gender organizations, informal networks of parents and teachers report to institutions projects they deem as dangerous in order to stop them. While most of the available literature has engaged in deconstructing the rhetoric promoted by anti-gender movements, this article questions how mothers and teachers get involved in practices of school surveillance. Building on interviews with those who attended anti-gender conferences in 2015, the analysis is focused on women’s participation in the protest. The content of the interviews illuminates the incorporation of the key-point on which the rhetoric of the movements insists: the ideology of gender exists and represents a tangible danger. However, the consent to the mobilization is not unanimous and univocal. In fact, two narratives emerged: one «moderate», the other «radicalized». They reflect a plural interpretation of the anti-gender discourse, even in a limited social space such as the one investigated by this research. Finally, the analysis shows how the different narratives converge on a shared willingness to supervise the school, as the priority of family in sexual education remain unchallenged. 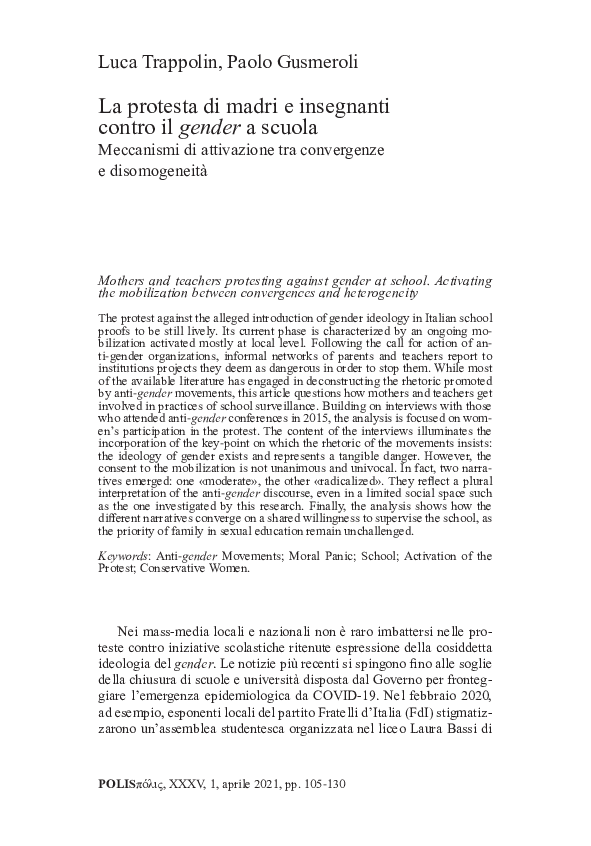