Do sanctions really deter rule-breaking? Sociological researches on de- terrent efficacy of law enforcement activity found no systematic, significant, negative relationship between sanctions and crime rates. The same concerns the relationship between crime rates and police strength: most studies found null or positive effect on crime. According to us these results depend on the use of a linear approach postulating a proportional relationship between crime (Noncompliance) and control system (Coercion). Instead, we structure it as a non-linear competitive model. The crime is considered as a complex, discontinuous, system, able to exhibit positive, non-proportional feedback and chaotic interludes, an unpredictable behavior, uncontrollable from police. The model estimates in what measure police deters crime. Applying it to Italian data from 1985 to 2003, our results show that police really deters crime which is far from a chaotic range, from a lack of control and prevedibility. The most interesting finding, absent from «traditional» research, is a specific measure year by year of the number of crimes which could be committed and which are not committed through the police's deterrent effect. The sociological importance of this «measure» is undoubted: a social researcher can have a more precise idea of the situation compared to widespread feelings of social alarm. Also for this reason a non-linear analysis really seems to exhibit an heuristic superiority able to shed light upon issues destined to keep in the shade in other approaches. 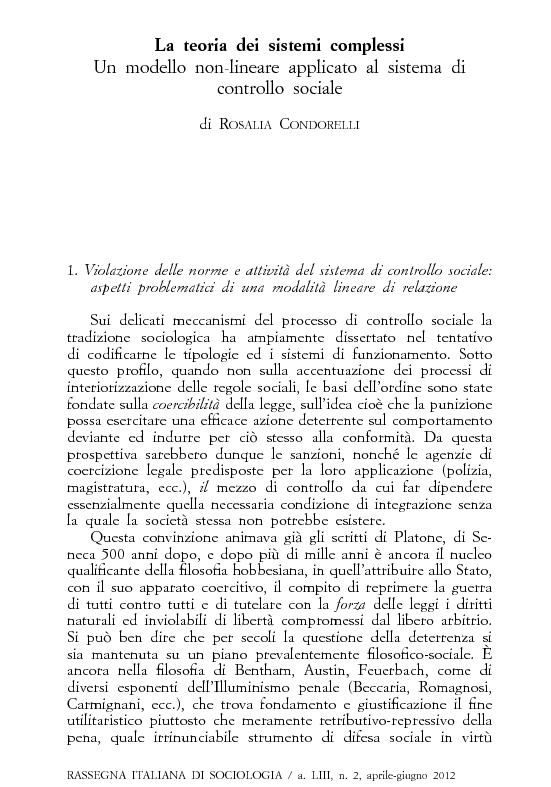