Adopting a production-of-culture perspective focused on the production of meanings, the article presents a sociological analysis of the social construction of the "canzone d'autore" as a musical genre and aesthetic category in the Italian popular music. The "canzone d'autore" has been the product of a constellation of factors which crystallized in the Sixties and Seventies - among them the rise of a new category of cultural producers, the so called "cantautori", as an effect of the restructuring of musical industry as a recording industry - and eventually brought to the constitution of a relatively autonomous field in the sense of Bourdieu. The history of this process is mapped through the intersection of a set of discourse and practices: first of all the specific public discourse about this genre, its authenticity and artistry, of various producers of meaning (among them the same cantautori, musicologists, journalists, literary critics and writers). The genesis of the field has been possible however thanks to the organization by cultural entrepreuners of a specific and autonomous organizational system, above all the Club Tenco, a private, non-profit cultural institution whose role is both to keep alive the memory of Luigi Tenco, a cantautore who committed suicide in 1967, and to provide the means (first of all isolation from commercial ends) for a ritual classification of the canzone d'autore among the fine and autonomous arts. 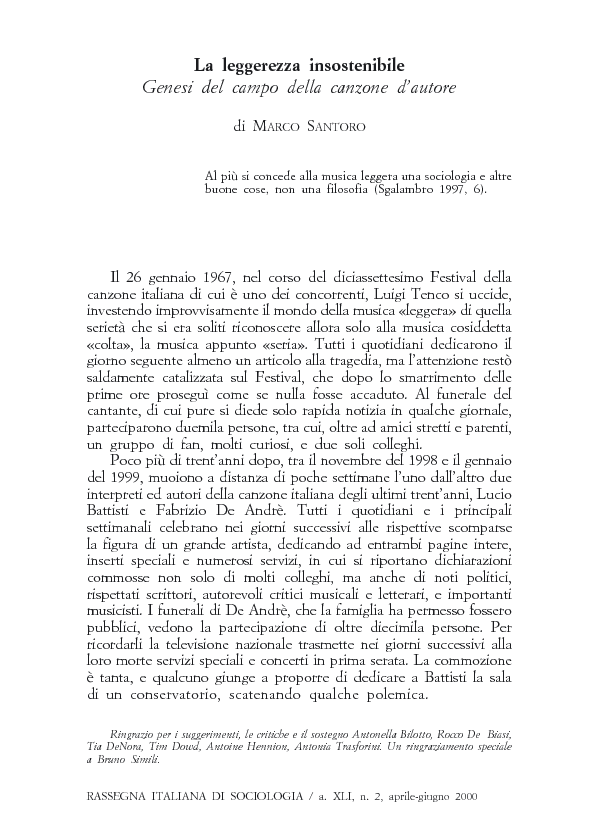