Head nods and shakes are significant bodily expressions of agreement and disagreement and they are considered one of the first nonverbal behaviors acquired by infants (Darwin, 1872; Guidetti, 2005). However, different cultures embody consent and dissent differently. For example, while in the Western culture nodding means "yes" and shaking means "no", in Bulgaria the same gestures can have exactly the opposite meaning (McClave, Kim, Tamer e Mileff, 2007). According to the embodiment theory, cognition and sensory-motor mechanisms are strongly related (Barsalou, 2003). Generally, this relationship shows up as a facilitation or interference effect in cognitive processing based on whether bodily and cognitive states are compatible or not. Andonova and Taylor (2012) showed that these compatibility effects were not universal but culture-specific. In their experiment, involving American and Bulgarian participants, they found that inducing the two movements of nodding and shaking respectively generated positive and negative evaluations, but only in the US sample, without replicating the effect with the Bulgarians. However, this and other previous studies on head gestures (e.g. Wells e Petty, 1980; Förster, 2004) only investigated the conditions in which an induced action produces subsequent effects on the processing of a stimulus, while the reverse effect of when the processing of a stimulus concurrently activates a compatible action was not taken into account. A recent study (Moretti e Greco, 2018a) involved for the first time head movements in the investigation of the second kind of compatibility effect. Participants (Italians) were asked to assess a series of sentences as true or false by moving them vertically or horizontally with their head, thanks to a software that detects head movements and converts them in the mouse pointer motion. Authors found that response times were shorter when true sentences were evaluated with the vertical movement of head nodding, and when false sentences were evaluated with the horizontal movement of head shaking. The present study replicates this experiment with a Bulgarian sample, in order to test whether the compatibility effect manifests itself in the same way as in the Western culture or the opposite is applicable for Bulgarians. Results clarify to what extent embodiment effects are innate or learned, contributing to the theoretical debate on the relationship between body and cognition. 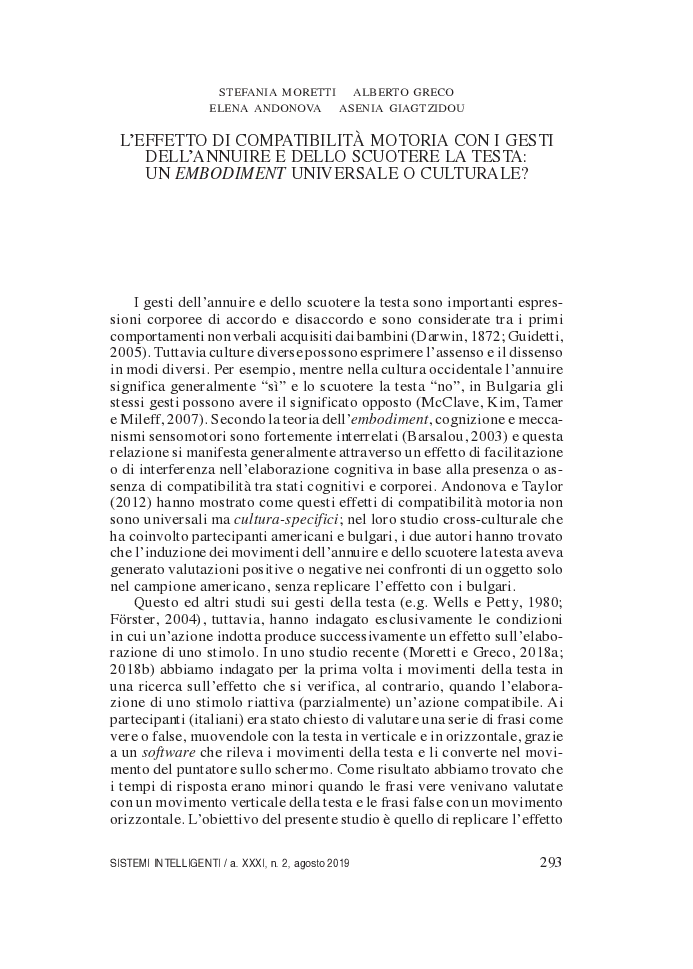