In the present paper we discuss the problem of categorization as seen from both the points of view of cognitive psychology and machine learning and we use it as case study about the need of an interdisciplinary approach within cognitive sciences, since the sectorial approaches separately come out to be inadequate and incomplete. In fact, on a hand the approach of cognitive psychology produced the useless diatribe between prototypes theory and exemplars theory, within it some authors even proposed "experimenta crucis" which lay themselves open to deep methodological criticisms. On the other hand, in the filed of machine learning it was developed the idea, practically ruling, that the only internal representations, usable by classifier systems so that they were cognitively pregnant, must be those based on logical representations (e.g. decision trees), completely and totally denying the experimental evidences of cognitive psychology. These errors, which were encountered by the sectorial approaches, would be easily avoided if an interdisciplinary approach to categorization were used. In fact, some results in machine learning and computational statistics can be used to show that a categorization entirely based on prototypes or on exemplars cannot be absolutely proposed for both theoretical reasons, due to the necessity of a statistical trade-off between robustness and sensibility, and for experimental reasons due to the existence of classifier systems, which make use of hybrid representations based on prototypes and exemplars, and that can hence be proposed as a hybrid theory prototypes-exemplars. Besides, the results in cognitive psychology can be used to definitely confute the erroneous belief, spread in machine learning community, about the cognitive plausibility of logical representations of concepts. Concluding, we can state the categorization problem, as many of problems tackled in cognitive sciences, should not be pigeonholed in a single discipline, on contrary, it should be dealt in an interdisciplinary or even "trans-disciplinary" way based on integration or superseding of traditional disciplines. 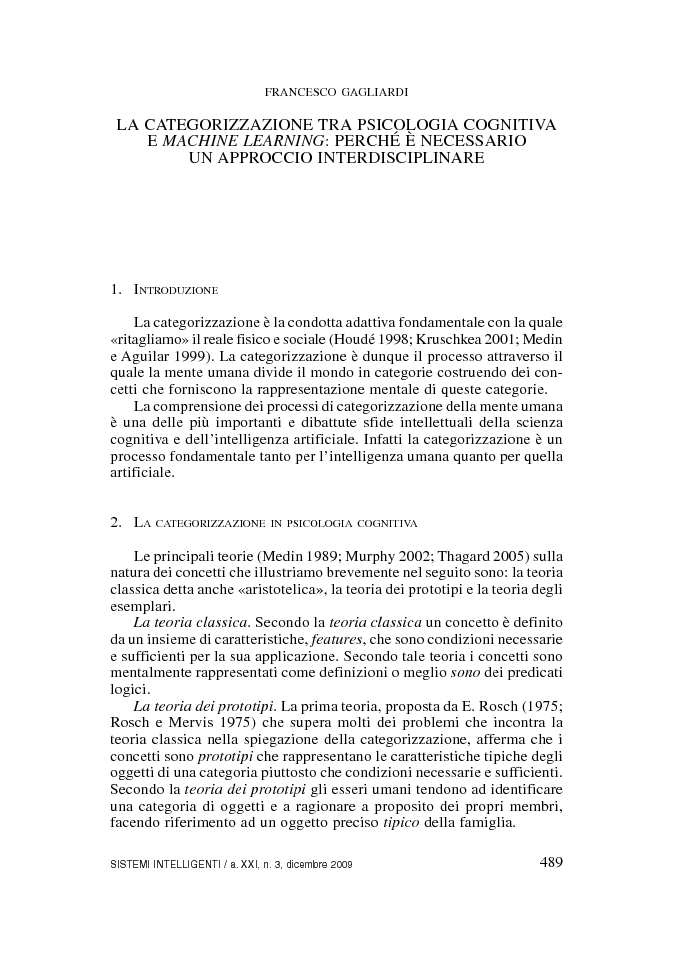