The aim of the present study was to investigate the relation between the ability to understand other's intentionality and self-awareness at 18 months of age. Two experimental tasks were administered to 30 Italian children (17 girls; 13 boys) of 18 months of age in a laboratory playroom at the University of Rome "La Sapienza". First, a task assessing self-awareness (adapted from Asendorpf et al., 1996 and from Pipp-Siegel, 1997) second, a task assessing the ability to understand the intentions of others (Meltzoff, 1995). The Uzgiris-Hunt Scales (1975) were administered to the children to assess their cognitive abilities. Moreover, mothers were asked to fill out the "Questionnaire on communicative and linguistic development in the second year of life" (QSCL, Camaioni et al., 1992) to assess the children's communicative level. The tasks evaluating self-awareness and understanding of other's intentionality were associated. Children who were better able to infer other's intentionality also obtained a higher score on the self-awareness task. The association between the ability to infer the intentions of others and the ability to take the self as a mental object at 18 months appears to be genuine, since the children examined were quite homogeneous as far as their cognitive and communicative abilities were concerned. It is reasonable to think that the representational ability mediates the performance of the children in both experimental tasks administered. However, this does not completely account for the association found between them. What may contribute to the association between self-awareness and the ability to understand other's intentionality is the organizational role played by the self at 18 months of age. During the second year of life, the self becomes the center of the child's volitional activity with the role of planning and coordinating one's own actions with respect to actions and plans of other intentional agents. 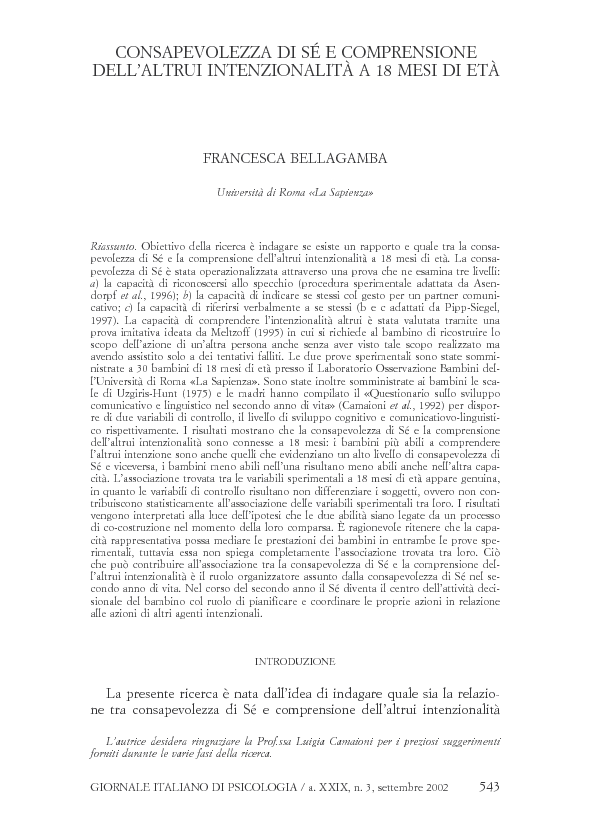