In this work, we investigate the processing of bound stems in L1 and L2 Italian in order to verify whether their lack of autonomy is a factor affecting processing mechanisms or whether, on the contrary, they are processed in the same way as free and autonomous stems. In paradigmatic approaches, morphological connections among words are established on the basis of simultaneous semantic and formal similarities; consequently, morphologically complex words should be considered as members of the same family even if they do not share a proper segmentable and autonomous stem. In order to answer our research question, we conducted a maskedpriming experiment where derived target words ("giornalismo", "terrore") were primed by derived words comprising free ("giornalista") and bound stems ("terribile"). Results indicate similar effects yielded by free and bound stems on the recognition of morphologically related words relative to both an unrelated and an orthographic condition with native speakers. With nonnative speakers, however, the facilitation observed in the morphological condition was significant relative to both the unrelated and orthographic conditions only in the free set. With bound stems we did observe an effect, which was however significant only relative to the unrelated baseline. We conclude that the lack of a transparent, segmentable and autonomous status does not affect L1 processing mechanisms as predicted by paradigmatic approaches, while for L2 speakers the establishing of truly morphological relationships might be impaired by formal opacity. Our interpretation is in line with models of L2 processing which acknowledge the role of morphology, while admitting a possible interference of formal aspects. 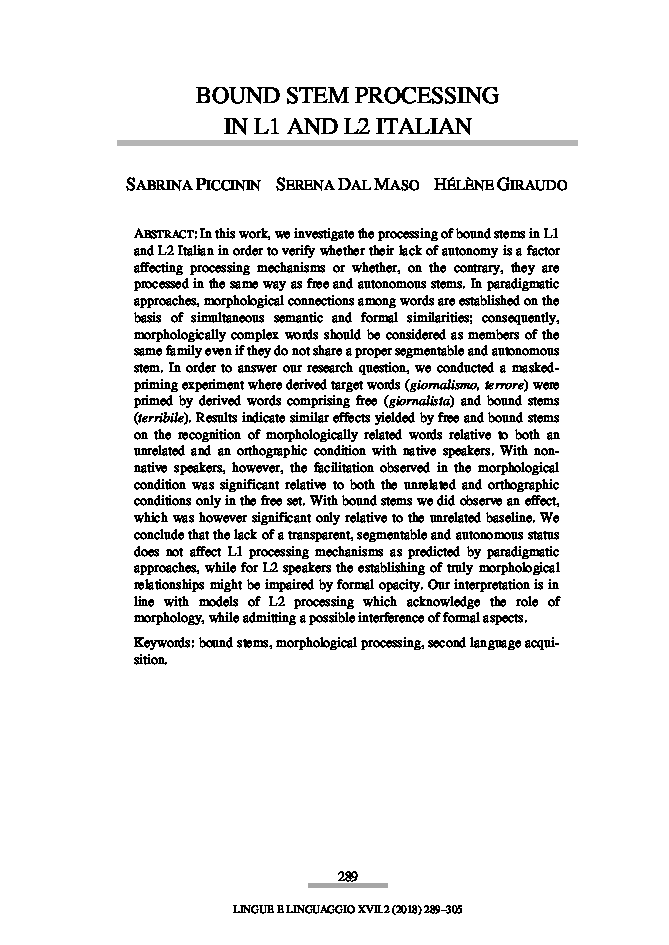