In the second issue of «Filosofia politica» (cf. no. 3/2011) dedicated to the matter of the «subject», the authors take up the challenge of reconsidering the name of the subject in the post-political age, by taking the moves from the end of the subject itself as a theoretical and political device of Western metaphysic and of modern political philosophy. In this frame, the gap between subjectivation and subjection that is manifest in the dynamics of representation of the people is taken into account (L. Bazzicalupo), and the language of psychoanalysis is analyzed in order to shed a light on the decentralization of the subject and on the psychic dimension of the process of subjectivation (I. Dominijanni). Furthermore, the structural division that characterizes the subject is pointed out through an inquiry into the concept of «person» in Western legal and political thought, in order to stress its appropriative, excluding and discriminating force and to move toward an «impersonal subject» (E. Lisciani Petrini). The possibility of emancipatory practices is reconsidered both by analyzing the racial identification of the subject (G. Giuliani) and by looking at the new laboratories of subjectivity that are growing outside the Western space (S. Chignola and S. Mezzadra). The path defined in this monographic issue proceeds to the point marked by the question of agency, which is articulated at the crossing point of antagonism and political subjectivity, where the friction of politics and political philosophy produces a spark (E. Laclau). 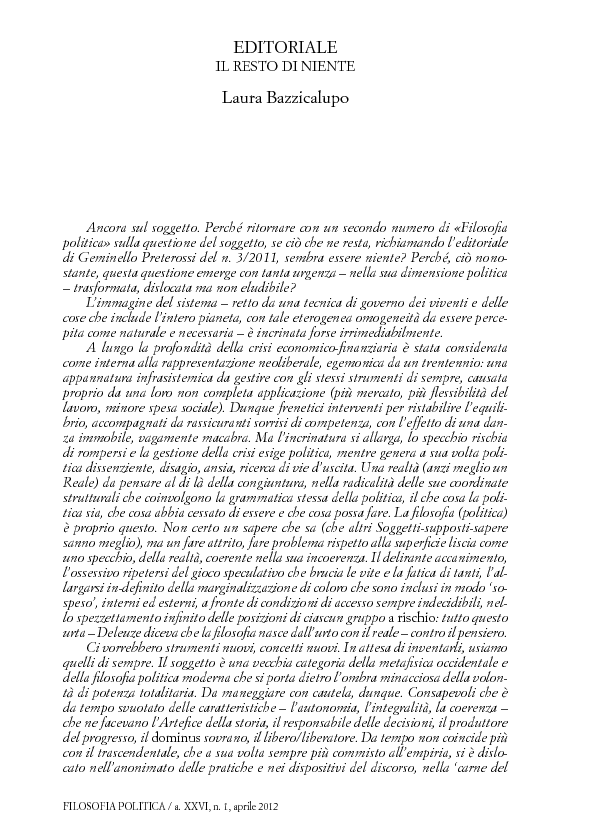